Grow Text SizeShrink Text Size
Masten and Armadillo Claim Lunar Lander Prizes
With only a few days remaining in the 2009 competition period, Masten Space Systems of Mojave, California successfully met the Level Two requirements for the Centennial Challenges - Lunar Lander Challenge and by posting the best average landing accuracy, won the first place prize of $1,000,000.The flights were conducted with their “Xoie” (XA-0.1E) vehicle on Oct. 30 at the Mojave Air and Space Port. Armadillo Aerospace, the long-time leader in Lunar Lander Challenge efforts, was the first team to qualify for the Level Two prize with successful flights on Sept. 12 in Caddo Mills, Texas. The average landing accuracy determines which teams will receive first and second place prizes. The average accuracy for Armadillo Aerospace flights was 87 cm. but the Masten team achieved an accuracy of 19 cm, moving them into first place. Armadillo Aerospace will receive the $500,000 second place prize. 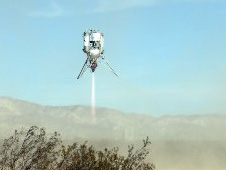 Masten Space Systems' "Xoie" rocket rises above the Mojave Desert on Friday. Credit: NGLLC / X Prize Foundation
“Xoie” uses liquid oxygen and isopropyl alcohol as propellants and it has an all-aluminum rocket engine. The vehicle weighs 300 pounds when empty and 850 pounds when fully loaded with propellant. The Masten team scheduled flight attempts for Oct. 28 and 29. On Oct. 28 they began two different flight attempts but these were canceled before liftoff due to computer communication problems and other technical issues. Similar difficulties on the morning of Oct. 29 also resulted in no official flight attempts. In the afternoon of Oct. 29 a very good flight of over three minutes was completed with a very accurate landing. However a fuel leak led to a fire after touchdown that damaged wiring, insulation and other components and so the attempt could not continue. The judges allowed the Masten team to schedule a second attempt for the morning of Oct. 30.

The vehicle had to be returned to flight-worthy condition and pass a pressurization test before the next attempt. Part of the team, with help from additional volunteers, worked all night to complete the repairs. Two three-minute flights were completed in the morning with excellent landing accuracy but due to a number of technical problems that had to be overcome between the two flights, the team used almost all of their available time. The last step in the challenge of placing the vehicle back on the transport trailer where it began, normally a trivial step, provided some additional drama. With only a few minutes remaining, the truck that pulls the trailer got stuck in the soft Mojave dirt and for a moment it looked like time might run out. But this last obstacle was overcome, the final step was complete, and the flight attempt was successful.

Four teams have been in pursuit of the 2009 Lunar Lander Challenge prizes during the competition period that opened in July. The BonNova team dropped out of the competition early last week. Unreasonable Rocket, a father-and-son team from Solana Beach, California, conducted Level One flight attempts during the final days of the competition period but did not complete any qualifying flights. Many of the Masten team members were at the Cantil, California test site to cheer on the Unreasonable Rocket team and even helped with troubleshooting. With their efforts on Oct. 31, Unreasonable Rocket did earn the distinction of being only the third team in the Lunar Lander Challenge to fly a vehicle from one pad to another and it remained aloft for 85 seconds. Some tests of their Level 2 vehicle were conducted on Nov. 1 but those were not successful.

To qualify for Lunar Lander Challenge prizes, the rocket vehicles must take off from one concrete pad, ascend to approximately 50 meters, fly 50 meters horizontally and land on a second pad. After refueling at that pad, the vehicle must repeat the flight, landing at the original pad and completing the round trip, including fueling and refueling operations within two hours and fifteen minutes. For Level 1 the vehicle must remain aloft for at least 90 seconds on each flight. For Level 2 the flight time must be at least 3 minutes on each flight and one of the two landing pads features boulders and craters to simulate the lunar surface.

The events of the past two months have brought the four-year Lunar Lander Challenge to a dramatic conclusion with all of the two million dollars in prizes being awarded. “The Lunar Lander Challenge has had its intended impact with impressive performances by multiple teams representing a new generation of aerospace entrepreneurs” said Andrew Petro, NASA’s Centennial Challenge program manager. “These companies have demonstrated reusable vehicles with rapid turnaround and a surprising degree of precision in flight, and they have done all this at a much lower cost than many thought possible.”

The Lunar Lander Challenge is one of six Centennial Challenges managed by NASA’s Innovative Partnership Program. The Lunar Lander Challenge competition was managed for NASA by the X Prize Foundation under a Space Act Agreement. NASA provided all of the prize purse funds. The Northrop Grumman Corporation, a commercial sponsor for the challenge, provided operating funds to the X Prize Foundation.

For more information on Centennial Challenges, visit: http://www.nasa.gov/offices/ipp/innovation_incubator/cc_home.html
› Back To Top