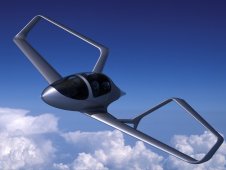 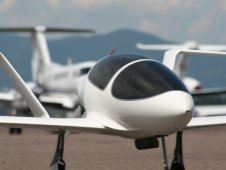 This quarter-scale prototype of Synergy was exhibited at 2011's Green Flight Challenge. The unique design of the plane captured the attention of enthusiasts and the media. (Synergy Aircraft)
View large image 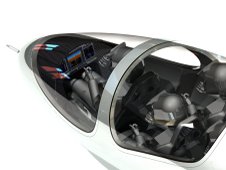 This graphic shows the cockpit of Synergy, which will ideally seat five to seven passengers, including the pilot, in a roomy, quiet environment. (Synergy Aircraft)
View large image Who they are: Synergy Aircraft is a seed-stage aircraft development company in Kalispell, Mont. Headed by CEO and designer John McGinnis, the company was created around the design of a small, efficient personal aircraft called Synergy. McGinnis, along with family members, volunteers and college interns, has been building a full-scale, five-seat prototype. In June 2012, the company raised more than $95,000 through KickStarter, an online crowdfunding website that facilitates contributions from the public to startups all over the globe. They hope to complete the construction phase of the full-scale Synergy plane within the next year and, with further funding, transition to becoming a kit aircraft company.

Competition stats: Synergy was scheduled to compete in the Green Flight Challenge in September 2011, but was not able to enter a full-scale model of their aircraft because of timing and funding challenges. However, they exhibited a quarter-scale electric-powered model at the expo, which garnered them a lot of attention and interest in their ongoing work.

Synergy designer John McGinnis has harbored a dream of designing his own personal aircraft for more than three decades. McGinnis has a professional background in composite manufacturing and product design, and has always been interested in aircraft technology. While fostering his interests through study behind the scenes, he was waiting for the perfect outlet to bring his ideas to life. "Airplanes are expensive to develop," he said.

NASA's 2011 Green Flight Challenge competition gave him an opportunity and financial incentive to create a physical construct of his brainchild, which he named Synergy for its mutually-reinforcing use of multiple drag reduction strategies. "I think competitions change the state of the industry in an extremely powerful way," he said.

Synergy is meant to be a small, quiet, fuel-efficient personal aircraft that can seat five to seven people. It features a unique double box-tail configuration designed to reduce drag without greater wingspan so that it can achieve higher speeds without reducing payloads. It is the team's hope that one day, Synergy-style aircraft will become a viable, affordable option for direct regional transportation.

Though the company was slated to compete in September 2011, engine delays and funding challenges prevented them from completing the aircraft in time. Instead, they exhibited a quarter-scale model at the expo. Synergy's sleek, unusual design attracted a lot of media attention and interested enthusiasts. The intended results and performance that Synergy promises could potentially create a paradigm shift for the way current aircraft are constructed, McGinnis said.

Since the challenge, McGinnis and a small team of family members, college interns and pilot and COO Paul Noyes have continued to work on completing a full-scale prototype. Acknowledging that funding is still their chief obstacle, McGinnis created a business proposal on KickStarter, a crowdfunding website on which anyone with an Internet connection can make a contribution to hundreds of entrepreneurial proposals in all disciplines.

In June 2012, the fundraising campaign closed with more than $95,000 in pledged funds. "That keeps us working in the shop without another interruption; it funds the burn rates for a few months," McGinnis said. Although work can begin, further funding will be the key to enabling future phases of the building process. McGinnis hopes to complete the prototype in less than a year, but can’t predict actual dates. McGinnis estimates approximately seven man-years remain in the detailed engineering, programming and fabrication of the project, dependent on the timing of further funding. "It's a dollars-and-cents thing," he said.

Once they are able to complete and test the plane, they plan to market it first to experimental kit builders. "Kit production is the best development pathway to prove out our product and our production methods," McGinnis said, before they take Synergy to the commercial market.

Long-term, McGinnis wants to see Synergy become a blueprint for private air travel. "We want to partner with the existing infrastructure of general aviation, license intellectual properties to get other players, disseminate technology that we already have. Basically, we want to see more investment internationally and nationally in the opportunity to use our most advanced aerodynamics.

"Synergy is a product that the consumers will accept because it's roomy, comfortable and quiet and has state-of-the-art technology inside and outside. So, when more airplanes like Synergy are available, we will have a different kind of dialogue."