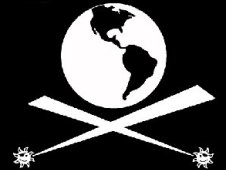 Competition stats: Headed by team leader Brian Turner, the Pirates performed notably well in all three competitions, but did not win a monetary prize. For the first two runs, they used reflected solar power from a series of full-length mirrors to power mechanical climbers. In 2006 and 2007, they finished among the top competitors. "I remember after 2007 saying that the only way we could keep competing was if a laser and a chunk of money fell into our laps. That week, I got an unsolicited check for $5,000 from a fan who saw us in 2007. The next week, we were contacted about TRUMPF's offer of laser power to competitors. Many times in the competition, our participation was hanging by a thread and something came through," said team captain Brian Turner. At the final competition in 2009, they switched to laser power to fuel their climber, "MaryAnn."

The Kansas City Space Pirates entered the Power Beaming Challenge with the slogan "In pursuit of NASA loot." They even branded the team with their own version of a jolly roger, Earth in the place of the traditional skull and crossed sun beams in lieu of bones. Now, three years after competing in the final competition, the team has reorganized its mission toward a bold new goal based on their earlier accomplishments.

Later this summer, the Pirates will attempt to keep a one-pound robotic helicopter flying for 48 hours. The power will be provided by laser beams, and could lead to big things for the group if they are successful.

The project is a result of the team’s desire to advance the technology they relied on during the challenge into something that could have broader use. The past few years since the competition have been spent reclaiming their personal lives. "Since we lost, we had to focus on our day jobs for a while," said team leader Brian Turner.

About eight months ago, Turner took stock of the leftover equipment that was still lying around the garage and decided to put it to use. He said that participating in the Centennial Challenges contest provided them with a foundation upon which to carry this new idea forward.

The team has found that many of their sponsors from the challenge have stepped forward to partner with them, helping fund equipment purchases. "I got that response because of how well the competition went for them," Turner said. "The resources are too expensive to start from scratch. There's no way that we would be able to show a credential level that would be credible to investors without the structure that the competition provided."

With a core group that includes Turner, Don Stowers, Duane Johnson, Frank Smith, Chad Hampy, Martin Lades and a dozen or so other volunteers, the pirates set sail. Regarding the time commitments and dedication they have put toward the project, Turner said, "It takes a lot -- more and more every day."

The flight will take at least eight volunteers who will monitor the helicopter for 48 hours or more, and the effort will be streamed live for viewers. The helicopter will have backup battery power for take-off and landing. Once airborne, it will receive power continuously from a laser. It is "smart" enough to hover in a position that's +/- three feet within range of the power source on its own.

Once mainstreamed, the technology could drastically reduce the use of fossil fuels, opening the possibility of hybrid-style airplanes or laser-fueled plans that don’t rely on other resources. The cost and safety of lasers are also improving, making wide use more plausible.

"This will be the longest flight by far with the least expensive setup," Turner said. "The cost of lasers is falling; that’s going to make power beaming practical as an application for everybody."

Although the technology is largely still in the research and development phase, Turner said that now more than ever, practical implementation is finally within reach in the next decade, if not sooner.

"We've got a huge list of possible applications for power beaming. We're going to make a business plan and take it to investors and try to take it to commercialization," Turner said.

In addition to preparing for their new mission, Turner regularly speaks to students in an effort to get them on board with science. "I believe we need to encourage the kids to get into science and technology," he said. "I consider it part of our mission."