After the Challenge: Final Frontier 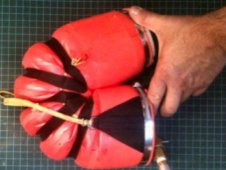 The components of the suit are designed to be more malleable, soft and lightweight. (Final Frontier)
View large image 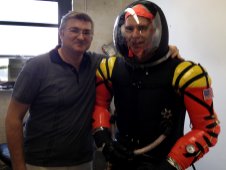 Final Frontier founders Ted Southern, right, and Nikolay Mosieev show off one of their commercial spacesuit designs. The won $100,000 in the 2009 Astronaut Glove Challenge. (Final Frontier)
View large image Who they are: Final Frontier Design is the team of inventor and designer Ted Southern and spacesuit engineer Nikolay Mosieev. Southern has a master’s degree in sculpture from the Pratt Institute in Brooklyn, N.Y., and has built costumes for Broadway, television and movies, even the wings worn by Victoria's Secret models in television commercials. Mosieev has a master's of aeronautics from Moscow University and has worked as a lead spacesuit engineer and designer for the Russian Federal Space Agency for about two decades.

The pair formed a team in 2007 to compete in the Astronaut Glove Challenge. After a second-place win in 2009, they continued to pursue commercial spacesuit design, contracting with NASA Small Business Innovation Research. In July 2012, they raised more than $27,000 on the crowd-funding website KickStarter.com, which allows the public to contribute to startup projects through an online database. Now that they are funded, they are building their next generation spacesuit. They are based out of Brooklyn, NY.

Challenges: Astronaut Glove Challenge in 2007 and 2009

Competition stats: Their prize-winning competition was held on Nov. 19, 2009, at the Astronaut Hall of Fame in Titusville, Fla., near NASA's Kennedy Space Center. Final Frontier Design took home the second-place prize of $100,000.

Ted Southern, president of Final Frontier Design, spoke with Centennial Challenges recently about upcoming projects and their goals as a company.

How have things changed for Final Frontier since your second-place finish in the 2009 Astronaut Glove Challenge?

Things have changed a lot. Final Frontier Design only existed as an informal partnership between Nik and me at the start of the challenge. After the challenge, we went on to form a limited liability company. We secured NASA Small Business Innovation Research contracting, built two intra-vehicular activity spacesuits, developed 25 glove iterations, and have been thinking beyond pressure garments to radiation protection, thermal issues and communications. We have secured an O-1 visa (for foreign nationals with extraordinary abilities in the arts, sciences, education, business, entertainment or athletics) for Nikolay (who is from Moscow) and licensed our plans. We have matured and developed a lot.

Why do spacesuits need improvement? What areas are you addressing?

Current suits are very expensive for commercial markets. In addition, even intra-vehicular activity suits are heavy, restrictive and based on very old technologies like link-netting. We are addressing the cost, weight and mobility of spacesuits, especially pressure garments, by building a newly designed single, pressure-restraint layer using innovative pattern-making and construction techniques. Our goal is to match the current safety performance requirements of comparable suits while drastically reducing the mass and price.

Spacesuit pressure garment gloves are an especially complicated part of the softgoods technology of the suit. Hands require an exceptional range of motion, and there are as many joints in the hand as in the rest of the body. Their muscles are miniaturized, without the leverage to overcome the pressure differential stiffness that larger joints such as elbows or knees can. Hands are the primary means of human interaction with and manipulation of their environment; therefore, glove functionality determines the functionality of the human, the astronaut. We are prototyping and testing new pressure garment gloves that offer superior range of motion, minimal torque while pressurized, minimal bulk and seam requirements and a truly anthropomorphic shape.

What are your suits made of? Where do you find the proper fabrics, components and materials?

We try to use off-the-shelf components for budget reasons, but there are a fair amount of custom parts. Our fabrics are market-available and heat-sealable, though we tend to use very heavy weights that are only available from the manufacturers. The visor is blown in our affiliate shop, Brower Propulsion Lab. New suit hardware, like the waist ring, visor seal and O2 manifold, will be machined in-house. Parachute hardware and aviation spec equipment are helpful.

With commercial spaceflight becoming a reality, where do you fit in to the market? Who is your customer?

Our customer is not the individual astronaut but the spacecraft company. Suits are, by necessity, designed and manufactured according to the craft or ship in which they are to be used. Flight patterns, life support interface requirements, communications -- even the look of the suit is tailored to the partner craft. We hope to partner with or contract to space-access companies.

NASA is a customer both in support development and investment roles such as Small Business Innovation Research contracting, and as a certifying and validating agency. We hope to continue our work with NASA and continue to seek good contacts within the agency.

How do you balance collaboration with other NASA centers while living and working in New York?

I have lived in New York City for more than 10 years, and consider it home. I can’t imagine living any place else. It does make for strange encounters with the Johnson Space Center folks, who sometimes assume I am in Houston and ask me to come over for a meeting or have testing done with local Texas astronauts. I anticipate needing to travel a fair amount to keep up with the industry.

What are some of the features of the suit? How is physical work done? Heavy-duty sewing machines? By hand?

The fabrics or softgoods are heat-sealed together using specialized Final Frontier developed and adapted tooling. It is a similar process to sewing, involving flat patterns and seam allowances. We laser cut our patterns for good repeatability, speed and a finished, non-fraying edge. Heat sealing and assembly is done by hand. There is some finish sewing that is done using a heavy-duty sewing machine and by hand. Hardware is machined in-house or purchased.

Are you still doing costume work or other projects?

Yes. I have several freelance costume-fabrication jobs happening right now. I have seven wings created for the Victoria's Secret fashion show set for November 2012. I also just began a project for Cirque du Soleil, which involves similar inflatable technology as the spacesuits.

How do your professional strengths complement each other?

I am an “artist,” meaning I got an MFA in sculpture. Nik studied as an engineer and has spent much of his professional life working making spacesuits. Logically, I tend to be more unorthodox in approach than Nik; his engineering background ensures good scientific process in our development. Our different backgrounds complement our process.

We have an affiliate company, Brower Propulsion Lab, owned by Steven Brower, for machining and materials in Brooklyn. We have also had a series of interns and part-time assistants.

What is the ballpark timeline for completion?

We would like to complete our 3G suit and begin testing by January 2013.

What does an ideal future look like for the company?

What advice would you give future challenge competitors seeking to break ground and change the game?

Learn as much as you possibly can with the information available about the goal you're trying to achieve in the challenge. Pick something that you are interested in and pursue it with a passion. Don’t assume you need to be an expert in a field to compete; oftentimes a fresh perspective can bring new insight. Go with your instinct. And don’t stress too much -- just enjoy the ride. Try to make it fun.