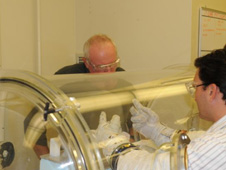 Using the vacuum box Raul Blanco, NASA JSC, does a side by side comparison of the gloves.
NASA attendance included the technical manager for the ISS and Shuttle space suit, the technical manager for the Constellation pressure garment, senior space suit engineers, EVA astronauts, ISS Chief Engineers and Crew and Thermal Systems Division managers. The prototype gloves were also demonstrated for space suit contractor personnel. The NASA evaluators were impressed by the quality of the gloves and different ideas that the competitors were attempting to implement. It was clear that each of the challenge winners had invested a significant amount of time in the design and manufacturing of their gloves. They have both made great strides in understanding the difficulties associated with space suit gloves and possible design solutions for those difficulties. We are currently evaluating options for future work with the winners of the Astronaut Glove Challenge.

- As reported by Richard Watson, NASA Johnson Space Center
› Back To Top