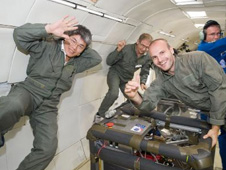 › View Photo Gallery NASA sponsored a series of flights during the week of September 27, 2010 for testing technologies in reduced-gravity conditions. This unique flight opportunity conducted at Ellington Field in Houston, Texas was the third year for NASA's Facilitated Access to the Space Environment for Technology (FAST) program. The 16 research teams that participated were comprised of small businesses, university groups, and NASA researchers from Massachusetts, New York, Maryland, Florida, Ohio, Indiana, Texas and California. These teams were selected competitively based on the value of their technology to NASA and the potential to increase the maturity of the technology through testing in this unique environment. The full list of participants is provided below.

The flights, aboard a Boeing 727 airplane operated under contract to NASA by the Zero Gravity Corporation, simulated the weightless environment of space and the reduced gravity conditions of the Moon. The FAST program paid for the flight time and operations while each research team funded their own technology development. The NASA Glenn Research Center coordinated the preparations for the diverse set of researchers, including many working in this space-like environment for the first time. NASA’s Reduced Gravity Office, at the Johnson Space Center, supervised the flight operations.

The aircraft provides a series of short periods of reduced gravity lasting about 25 seconds and by repeating the aircraft maneuver, researchers obtain over fifteen minutes of cumulative test time during each flight. During the week, two flights with lunar-gravity conditions and two flights with zero-gravity conditions were conducted with approximately ten research projects and 25 to 30 researchers on each flight.

NASA’s Innovative Partnerships Program has managed the FAST program for the past three years and beginning in 2011, it will be part of the Flight Opportunities Program in the Office of the Chief Technologist. The FAST program will solicit proposals for reduced-gravity testing opportunities for three or more flight weeks per year in the future, pending the availability of funding.

It will take time for the researchers to analyze the data that they collected but some provided their immediate reactions to their flight test experience in the quotes below.

We obtained fantastic data from our lunar gravity experience. This data will help us in developing our rHEALTH sensor for use as a universal biomedical laboratory on the ISS and future space environments.
Eugene Chan, DNA Medicine Institute, Inc.

We learned a great deal about the impacts of lunar gravity on our pulsed flow fluidization method. There was a significant observable difference in the way our lunar dust simulants responded to gas flow as gravity changed. This data will be useful in the design of a hydrogen reduction reaction chamber for extracting oxygen from lunar dust.
Aaron Paz, NASA Johnson Space Center

During the week of the FAST flights the Florida Tech team has collected vital information on liquid behavior in the simulated reduced gravity conditions of space. These data will be used by engineers and scientists to design more efficient and safer rocket vehicles for space exploration. Beyond acquiring these data, five Florida Tech undergraduate students have also been motivated and inspired to reach for the stars in their studies, as well as literally having the opportunity to take the ride of a lifetime! For this opportunity our team and university are highly appreciative of the science, education and inspiration made possible by the FAST program.
Dr. Daniel Robert Kirk, Associate Professor, Florida Institute of Technology

The Ad Astra Rocket Company flight team was able to validate a state of the art cryocooler unit and high temperature heat pipe unit that we envision using for the VASIMR VF-200 International Space Station flight. The FAST research program has allowed our team to validate these technologies in a highly relevant microgravity environment. The NASA FAST program embodies the spirit of scientific exploration through fundamental and applied research for space applications.
Ben Longmier, Ad Astra Rocket Company

The Stanford team was able to study structural deployment mechanisms in microgravity for a future CubeSat mission to characterize meteoroid impact. The microgravity test environment allowed us to understand more fully the behavior of several deployment strategies in a way that is not possible in the laboratory environment.
Sigrid Close, Stanford University

The FAST program allowed us to test a new piece of equipment for human sensorimotor assessment in a realistic spaceflight setting. The flights were invaluable to us in verifying that the basic system works in different gravity levels, and helped us to identify areas where improvements need to be made, specifically in ease of use for the operator and better instructions and visual displays for the subject. We hope to make use of the FAST program again to test the changes that we make as a result of these recent flights.
Mark Shelhamer, Johns Hopkins University School of Medicine

We had a wonderful experience with the FAST flight. We flew the two lunar g flights and all of our scientific needs were met as much as humanly possible. This was a wonderful scientific opportunity and the operation was smooth and extremely helpful. We felt the crew (NASA and Zero-G Corp) did a wonderful job professionally.
Dr. Jennifer Curtis and Casey LaMarche, University of Florida

The two flights were extremely valuable for evaluating the new technique we are developing to measure local heat transfer during flow boiling in low-gravity environments. In horizontal flow in earth gravity, the liquid falls down and wet the sides of the pipe. We found that in microgravity, however, that inverted annular flow can occur very easily when there is significant nucleate boiling on the surface--the bubbles act to "funnel" the liquid to the core of the tube resulting in dryout on the tube surface. This is quite different from what others have observed thus far.
Jungho Kim, University of Maryland