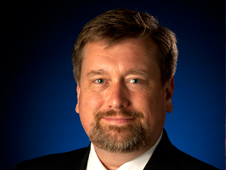 NASA's Office of the Chief Technologist coordinates, tracks and integrates technology investments across the agency and works to infuse innovative discoveries into future missions. The office also documents, demonstrates and communicates the societal impact of NASA's technology investments. In addition, the chief technologist leads NASA technology transfer and technology commercialization efforts, facilitating internal creativity and innovation, and works directly with other government agencies, the commercial aerospace community and academia.

Peck serves as NASA's chief technologist through an intergovernmental personnel agreement with Cornell, where he is on the faculty as an associate professor in the School of Mechanical and Aerospace Engineering and teaches in Cornell's Systems Engineering Program.

Peck has a broad background in aerospace technology, which comes from nearly 20 years in industry and academia. He has worked with NASA as an engineer on a variety of technology programs, including the Tracking and Data Relay Satellite System and Geostationary Operational Environmental Satellites. The NASA Institute for Advanced Concepts sponsored his academic research in modular spacecraft architectures and propellant-less propulsion, and the International Space Station currently hosts his research group’s flight experiment in microchip-size spacecraft.

Prior to his NASA appointment, Peck also worked as an engineer and consultant with industry and organizations including Boeing, Honeywell, Northrop Grumman, Goodrich and Lockheed Martin. He has authored 90 academic articles and holds 17 patents in the U.S. and European Union. Peck spent some of his early career at Bell Helicopter, where he worked on the V-22 Osprey and a smaller tilt-rotor aircraft that later would become the BA609. He also has experience with commercial communications satellites and military spacecraft as a guidance and control engineer and in mission operations at Boeing Defense, Space and Security. He was a principal fellow at Honeywell Defense and Space Electronic Systems, where he led advanced-technology programs, helped direct patent and intellectual-property investments and worked in business development.

At Cornell, Peck's work focuses on spacecraft dynamics, control and mission architectures. The Defense Advanced Research Projects Agency, the U.S. Air Force Office of Scientific Research and aerospace contractors have funded his academic research. Some of this research includes micro-scale flight dynamics, gyroscopic robotics, and magnetically controlled spacecraft, most of which have been demonstrated on NASA microgravity flights. Peck was the principal investigator on the CUSat in-orbit inspection technology demonstration, which is a pair of satellites built at Cornell. They are scheduled to launch in autumn 2012 on a Falcon 9 rocket through the U.S. Air Force Research Laboratory's University Nanosatellite Program. CUSat technology represents a capability that may help enable commercial, government and human space missions envisioned for the coming decades.

Peck also was the principal investigator for the Violet experiment, another satellite built at Cornell. Violet will provide an orbiting test bed for investigations in technology that will enable more capable commercial Earth-imaging satellites. Violet carries an ultraviolet spectrometer that will be used as a precursor to understanding exoplanet atmospheres.