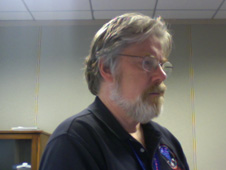 Richard Howard
Rick Howard received a B.S. in physics and astronomy from the University of Wisconsin in 1968 and a M.S. degree in astronomy from the Pennsylvania State University in 1974. From 1975 to 1984 he worked on millimeter-wave receivers and antenna systems for the National Radio Astronomy Observatory. He worked at NASA's Jet Propulsion Laboratory from 1984 to 1986 on advanced microwave and millimeter-wave remote sensing systems. In 1986 and 1987, he was site manager during the construction and initial operations of the Caltech Submillimeter Observatory located on Mauna Kea, Hawaii. In 1987, he rejoined JPL and in 1988 was detailed to the Office of Space Science at NASA Headquarters where he managed several space science flight programs and technology development programs. He joined NASA Headquarters in 1991 and continued to work on flight programs and advanced technologies in the Office of Space Sciences. He served as the Deputy Director of the Astrophysics Division from July 2001 until April 2010. He is currently the Deputy Chief Technologist in the Office of the Chief Technologist at NASA Headquarters.