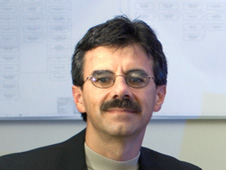 John Saiz
John Saiz is the Chief Technologist for NASA’s Johnson Space Center (JSC), serving as the principal advisor to Center leadership on matters concerning research and technology development. He has assumed a leadership role in providing an integrated approach for all Center R&D efforts to assure that the Center’s advanced technology planning, development, and infusion activities are strategically aligned with future NASA missions and programs. As the “innovation change agent” for JSC, Saiz is charged with instituting Center wide innovation initiatives to foster an environment that supports integrative thinking and maintains a culture of creativity and ingenuity. John also serves as the JSC point of contact for the NASA Space Technology Program and is responsible for authorizing and integrating skills and facilities needed to maintain Center core research and technology competencies.

Saiz holds a Bachelor of Science degree in Petroleum Engineering from New Mexico Institute of Technology and a Master of Science degree in Mechanical Engineering from the University of Houston. He came to NASA in 1989 after memorable adventures as a reservoir engineer in the Texas and Louisiana oil fields, along with experiences at Honeywell Defense Systems in Albuquerque, New Mexico and at ILC Space Systems in Houston. John’s NASA experience includes a number of assignments at the Johnson Space Center and at NASA Headquarters in the Space Operations Management Directorate. Since 2008, John has been assigned to the Advanced Planning Office as JSC’s Chief Technologist, in parallel with his assignment as the Engineering Directorate Chief Technologist, a post he has held since 2006.

While in Engineering, John managed a number of technology and spaceflight development projects that included efforts spanning the full spectrum of “technology readiness levels” from initial proof-of-concept laboratory demonstration through long-term spaceflight operations. Many of these developments were manifested to support flight applications on the Russian Mir, Space Shuttle and International Space Station.