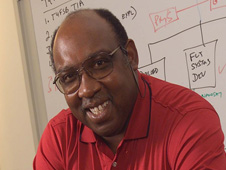 Prior to assuming the position as ARC Chief Technologist, John was Chief Technologist in the ARC Engineering Directorate. In that capacity and prior functions, John directed the design, development, test and evaluation of space systems and technology development, biological, biomedical, biosensor and bioinstrumentation technologies from conception to feasibility and prototype hardware development. From 2002 until June 2009 John was the Principal Investigator/Project Director for the Non-Contact Biosensors and in-situ Bioanalytical Systems tasks for the Exploration Medical Capabilities Program Element of the Human Research Program. From 2002-2004 John was the Agency Manager for the Biomolecular Physics and Chemistry Program, a collaborative technology program between NASA and the National Cancer Institute, which sought to advance the state of the art in Biomolecular Systems Research, as applied to NCI and NASA interests.

John has a BS in Electrical Engineering from Tuskegee University, and a MS in Biomedical and Electrical Engineering from Stanford University, and has over 35 years of combined NASA and Air Force experience in biological and biomedical technology development, satellite/spaceflight hardware development, electronic systems engineering, program/project management, advanced technology assessment and development, and program advocacy. John’s personal interests include reading, listening to jazz, golf, and his condo in Puerto Vallarta, Mexico.