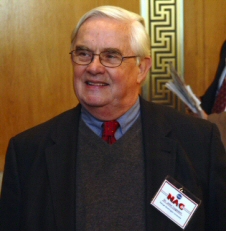 John M. Logsdon is Charles A. Lindbergh Chair in Aerospace History at the National Air and Space Museum; he began this 12-month senior fellowship in September 2008. From 1987 to mid-2008, Logsdon was Director of the Space Policy Institute at George Washington University’s Elliott School of International Affairs, where he is also Professor Emeritus of Political Science and International Affairs. From 1983-2001, he was also Director of the School’s Center for International Science and Technology Policy. He has been a faculty member at GW since 1970; from 1966-1970 he taught at the Catholic University of America. He holds a B.S. in Physics from Xavier University (1960) and a Ph.D. in Political Science from New York University (1970). Dr. Logsdon’s research interests focus on the policy and historical aspects of U.S. and international space activities.

Dr. Logsdon is the author of The Decision to Go to the Moon: Project Apollo and the National Interest and is general editor of the eight-volume series Exploring the Unknown: Selected Documents in the History of the U.S. Civil Space Program. He has written numerous articles and reports on space policy and history, and has recently completed the basic article on “space exploration” for the new edition of Encyclopedia Britannica. Dr. Logsdon has lectured and spoken to a wide variety of audiences at professional meetings, colleges and universities, international conferences, and other settings, and has testified before Congress on several occasions. He has served as a consultant to many public and private organizations. He is frequently consulted by the electronic and print media for his views on space issues.

Less recently, Dr. Logsdon served as a member of a blue-ribbon international committee evaluating Japan’s National Space Development Agency and of the Committee on Human Space Exploration of the Space Studies Board, National Research Council. He has also served on the Vice President’s Space Policy Advisory Board, the Aeronautics and Space Engineering Board of the National Research Council, NASA’s Space and Earth Sciences Advisory Committee, and the Research Advisory Committee of the National Air and Space Museum. He has served as the Director of the District of Columbia Space Grant Consortium. He is former Chairman of the Committee on Science and Public Policy of the American Association for the Advancement of Science and of the Education Committee of the International Astronautical Federation. He has twice been a Fellow at the Woodrow Wilson International Center for Scholars and was the first holder of the Chair in Space History of the National Air and Space Museum.