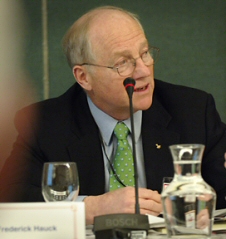 Frederick H. (Rick) Hauck
Rick Hauck was born in Long Beach, Calif., in 1941. He received a Bachelor of Science degree in physics in 1962 from Tufts University, where he was a Navy ROTC student. He was commissioned upon graduation and served as communications officer aboard a destroyer for 20 months. In 1964 he attended the Naval Postgraduate School in Monterey, California. Selected for the Navy's Advanced Science Program, he received a master's degree in nuclear engineering from MIT in 1966. He began flight training and received his wings in 1968. Deployed to the Western Pacific, he flew 114 combat and combat support missions in Southeast Asia off the aircraft carrier USS Coral Sea. Selected for test pilot training, he reported to the U.S. Naval Test Pilot School at Patuxent River, Maryland, in 1971. From 1971 to 1974, Hauck served as a project test pilot for automatic carrier landing systems in the A-6 Intruder, A-7 Corsair II, F-4 Phantom and F-14 Tomcat aircraft and was team leader for the aircraft carrier trials of the F-14. In 1974, he reported as operations officer of Air Wing 14, flying the A-6 Intruder, A-7 Corsair, and F-14 Tomcat aircraft from the deck of the aircraft carrier USS Enterprise.

NASA named Hauck to its astronaut corps in 1978. His first flight assignment was as pilot for Challenger in 1983 on the seventh shuttle launch. The crew deployed two communications satellites, tested the 50-robot arm, and conducted the first formation flying of the shuttle with another satellite.

History's first space salvage mission began in 1984 when Captain Hauck and his four crew members launched aboard Discovery to rescue two communications satellites, Westar VI and Palapa B2, stranded in useless orbits when their kick motors failed to ignite after they were released from another shuttle. Early in the flight the crew successfully released two commercial communications satellites. They then rendezvoused with first Palapa and then Westar. After some technical difficulties, Joe Allen and Dale Gardner succeeded in corralling both and berthing them in the cargo bay for return to earth for repair and relaunch.

In March 1985 Captain Hauck became the astronaut office project officer for the integration of the liquid-fueled Centaur upper stage rocket into the shuttle. In May 1985 he was named Commander of the Centaur-boosted Ulysses solar probe mission (sponsored by the European Space Agency), scheduled to be launched in April 1986. After the Challenger accident this mission was postponed, and the Shuttle Centaur project was terminated.

During the hiatus following the loss of Challenger Hauck was asked by the NASA Administrator to serve as the NASA Associate Administrator for congressional, public, and international relations. When NASA was ready to return to flight in 1988, Hauck was selected to command a crew of five veteran shuttle astronauts to test the redesigned spacecraft. Discovery lifted off on September 29, 1988. During the four day mission they deployed a communications relay satellite, conducted several experiments and tested more than 200 changes made to the orbiter since Challenger.

Hauck left NASA in 1989 to become director of Navy Space Systems in the Pentagon. When he retired from the Navy in 1990, he entered the space insurance business. He retired again in April, 2005 after fourteen years as president and CEO of AXA Space, Bethesda, MD.

Hauck was chair of the NASA External Independent Readiness Review Team for the Second Hubble Space Telescope Servicing Mission. He was a member of the External Program Assessment Team for NASA's 2nd Generation Reusable Launch Vehicle Program, the Space Launch Initiative and the Orbital Space Plane. He has chaired a National Research Council (NRC) study for NASA regarding the vulnerability of the space shuttle to micrometeoroids and orbital debris, and an NRC study, titled Safe on Mars regarding the measurements that must be made robotically before the first human mission to Mars.

He is a Fellow of Society of Experimental Test Pilots, the American Institute of Aeronautics and Astronautics, and the American Astronautical Society. Hauck has been inducted into the Astronaut Hall of Fame and is a National Associate of the National Academies. He serves on the boards of the Astronaut Scholarship Foundation,and the U.S. Space Foundation. He is a member of the Advisory Council of the Institute of Nuclear Power Operations, the industry group that conducts regular detailed evaluations of all of the nuclear power plants in the United States. In the wake of the space shuttle Columbia tragedy and subsequent return to flight of Discovery he was a featured guest and news analyst on NBC and National Public Radio. He was awarded an honorary Doctor of Public Service degree by his alma mater, Tufts University.

Rick Hauck is married to Susan Cameron Bruce. Together they have five children and seven grandchildren.