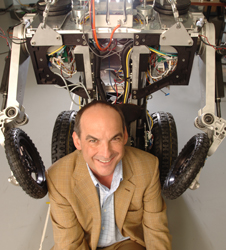 Kenneth Ford is Founder and CEO of the Institute for Human & Machine Cognition (IHMC) — a not-for-profit research institute located in Pensacola, Florida. IHMC has grown into one of the nation’s premier research organizations with world-class scientists and engineers investigating a broad range of topics related to building technological systems aimed at amplifying and extending human cognitive and perceptual capacities. Richard Florida has described IHMC as “a new model for interdisciplinary research institutes that strive to be both entrepreneurial and academic, firmly grounded and inspiringly ambitious.” IHMC headquarters are in Pensacola and a branch research facility will soon open in Ocala, Florida.

Dr. Ford is the author or coauthor of hundreds of scientific papers and six books. Ford's research interests include: artificial intelligence, cognitive science, human-centered computing, and entrepreneurship in government and academia. He received a Ph.D. in Computer Science from Tulane University. He is Emeritus Editor-in-Chief of AAAI/MIT Press and has been involved in the editing of several journals. Dr. Ford is a Fellow of the Association for the Advancement of Artificial Intelligence (AAAI), a member of the American Association for the Advancement of Science, a member of the Association for Computing Machinery (ACM), a member of the IEEE Computer Society, and a member of the National Association of Scholars. Dr. Ford has received many awards and honors including the Doctor Honoris Causas from the University of Bordeaux in 2005 and the 2008 Robert S. Englemore Memorial Award for his work in artificial intelligence (AI).

In January 1997, Dr. Ford was asked by NASA to develop and direct its new Center of Excellence in Information Technology at the Ames Research Center in Silicon Valley. He served as Associate Center Director and Director of NASA’s Center of Excellence in Information Technology. In July 1999, Dr. Ford was awarded the NASA Outstanding Leadership Medal. That same year, Dr. Ford returned to private life and to the IHMC.

In 2004, Ford was the recipient of the Pensacola Area Chamber of Commerce Business Leader of the Year Award for the growth of IHMC. Also, in 2004 Florida Trend Magazine named Dr. Ford one of Florida’s 4 most influential citizens working in academia. In 2005, Dr. Ford was appointed and sworn in as a member of the Air Force Science Advisory Board.