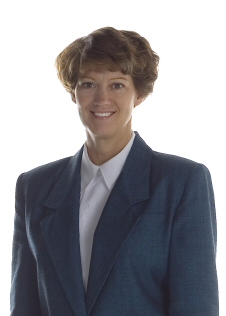 Col. Collins graduated in 1979 from Air Force Undergraduate Pilot Training at Vance AFB, Oklahoma, where she was a T-38 instructor pilot until 1982. From 1983 to 1985, she was a C-141 aircraft commander and instructor pilot at Travis AFB, California. She spent the following year as a student with the Air Force Institute of Technology. From 1986 to 1989, she was assigned to the U.S. Air Force Academy in Colorado, where she was an assistant professor in mathematics and a T-41 instructor pilot. She was selected for the astronaut program while attending the Air Force Test Pilot School at Edwards AFB, California, from which she graduated in 1990.
She has logged over 6,751 hours in 30 different types of aircraft. Collins retired from the Air Force in January 2005.

Selected by NASA in January 1990, Col. Collins became an astronaut in July 1991. Initially assigned to Orbiter engineering support, Collins has also served on the astronaut support team responsible for Orbiter prelaunch checkout, final launch configuration, crew ingress/egress, landing/recovery, worked in Mission Control as a spacecraft communicator (CAPCOM), served as the Astronaut Office Spacecraft Systems Branch Chief, Chief Information Officer, Shuttle Branch Chief, and Astronaut Safety Branch Chief. Collins served as pilot on STS-63 (February 3-11, 1995) and STS-84 (May 15-24, 1997), and was the commander on STS-93 (July 22-27, 1999) and STS-114 (July 26 to August 9, 2005). A veteran of four space flights, Col. Collins has logged over 872 hours in space. She retired from NASA in May 2006.

STS -63 Discovery (February 3-11, 1995) was the first flight of the new joint Russian-American Space Program. Mission highlights included the rendezvous with the Russian Space Station Mir, operation of Spacehab, the deployment and retrieval of an astronomy satellite, and a space walk. Collins was the first woman pilot of a Space Shuttle.

STS-84 Atlantis (May 15-24, 1997) was NASA's sixth Shuttle mission to rendezvous and dock with the Russian Space Station Mir. During the flight, the crew conducted a number of secondary experiments and transferred nearly 4 tons of supplies and experiment equipment between Atlantis and the Mir station.

STS-93 Columbia (July 23-27, 1999) was the first Shuttle mission to be commanded by a woman. STS -93 highlighted the deployment of the Chandra X-Ray Observatory. Designed to conduct comprehensive studies of the universe, the telescope has enabled scientists to study exotic phenomena such as exploding stars, quasars, and black holes. On STS-93, Collins was the first woman Shuttle Commander.

STS-114 Discovery (July 26-August 9, 2005) was the Return to Flight mission during which the Shuttle docked with the International Space Station and the crew tested and evaluated new procedures for flight safety and Shuttle inspection and repair techniques. After a 2-week, 5.8 million mile journey in space, the orbiter and its crew of seven astronauts returned to land at Edwards Air Force Base, California.

Currently she is a professional speaker, aerospace consultant, and President of Space Presentations, LLC