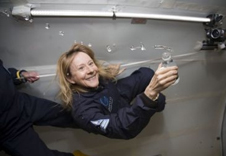 Esther Dyson is chairman of EDventure Holdings, the name with which she does business. Her primary activity is investing in and nurturing start-ups, with a recent focus on health care and aerospace. She recently (October 2008 to March 2009) spent most of six months training as a backup cosmonaut in Star City outside Moscow Russia. While there she had the pleasure of spending time not only with the cosmonauts, but also with some of the US’s finest astronauts.

Apart from this brief sabbatical, she is an active board member for a variety of startups, including 23andMe, Airship Ventures, Boxbe, Eventful, Evernote, IBS Group, Meetup, NewspaperDirect, Voxiva, WPP Group (not a start-up!) and Yandex. Her past investments have included Medstory (sold to Microsoft), Flickr and del.icio.us (sold to Yahoo!), Brightmail (sold to Symantec). Her current investments include Icon Aircraft (light sport aircraft), Space Adventures (which organizes programs such as hers for space tourists), and XCOR Aerospace. She also sits on the boards of several nonprofits, including the National Endowment for Democracy, the Eurasia Foundation and the Sunlight Foundation.

She began her career as a fact-checker for Forbes Magazine, and spent five years on Wall Street as a securities analyst. From 1983 to 2006, at EDventure Holdings, she produced the newsletter Release 1.0 and ran PC Forum, the computer industry’s leading annual conference. She sold EDventure to CNET in 2005, and left in 2007. In 1997 she published her first book, Release 2.0, about the impact of the internet on individuals’ lives. She speaks English and Russian and a little French and German, and has a degree in economics from Harvard.