The Space Environments Team at NASA’s Marshall Space Flight Center has developed a forward scatter radar system for the monitoring of meteor rates. Forward scatter radar has been used extensively for characterization of the meteoroid environment. The technique relies on the reflection of VHF signals from an over-the-horizon transmitter by the ionization trail of a meteor.

Antenna: 6-element Yagi; commercially available cut-to-frequency channel 4 TV antenna
Antenna orientation: Sits on the ground, pointed straight up
Receiver: ICOM PCR-1000 receiver
Receiver Settings: The CW demodulator is used so that 67.250 MHz (channel 4 zero offset) appears at about 700 Hz. This also inverts the passband so that the doppler shift of meteor echoes is reversed (frequency increases rather than decreases to the 'zero' frequency of the trail echo). The filter is set to 3 kHz bandwidth and the AGC is turned off.

Due to the curvature of the Earth, TV broadcasts originating more than 300 km away cannot be directly detected. When a meteor enters the atmosphere, its ionized trail can reflect, or scatter, the radio waves from distant transmitters so that a signal can be briefly detected by a local receiver.

The MSFC meteor radar is tuned to 67.25 MHz, which allows the system to record echoes from an array of Channel 4 TV transmitters around the southeastern USA. All of the transmitters are over the horizon as viewed from the Marshall Space Flight Center, so it is normally impossible to detect them. The closest transmitters on this frequency are in Dothan, AL, Charleston, SC, Oak Hill, WV, Little Rock, AR, and Kansas City, MO. The map below shows local Channel 4 zero offset TV transmitters with a circle around each showing the areas they illuminate down to an altitude of 100 km (typical meteor altitude).

Although the transmitters are over the horizon for MSFC on the ground, a meteor at 100 km above MSFC has a direct line of sight. The scattering geometry is tricky, so frequently a meteor will be seen visually but no echo will be heard from it (and vice versa).

Radio meteor rates are usually highest near dawn and lowest near dusk. That's because the dawn sky is moving directly into the swarm of space dust surrounding our planet. The Earth sweeps up particles just as the windshield of a moving car would pick up bugs.

There have been several requests from educators and amateur astronomy enthusiasts for information on this system. The following information may be used to setup a simple but effective forward scatter meteor radar system and collect useful scientific data.

Most amateur forward scatter radar systems use distant FM broadcast stations as their source. They tune to a quiet channel and hear a blast of music or talk when the ionization trail from a meteor completes the communication path. This uses very simple equipment (car radios are common) but is difficult to determine the meteor waveform and do any quantitative analysis of the signals. The technique documented here exploits the relatively stable, continuous signal from a TV station video carrier by demodulating it with a CW or SSB detector.

This information is not designed to be a complete tool, but more of a guide allowing one to substitute different pieces of equipment that might already be available and tailor the design and operation to maximize the effectiveness, based on location and the relative distance from various television signals.

No attempt has been made here to describe the science involved in a meteoroid entering the atmosphere and reflecting a radio signal. Information on the science of meteor scatter of radio waves may be found in numerous papers accessible through the Astrophysical Data System (http://adswww.harvard.edu/ search for “meteor radar”). This guide strictly confines itself to the construction and operation of a forward scatter radar system.

As this is our first attempt at putting this information on paper, there may be a number of areas that are incomplete. If this is the case, please contact the Meteoroid Environment Office (MEO) via e-mail and we will be happy to help you through the problem area. (This will also allow us to refine this guide and make it better for future users.)

On a final note: If developing a forward scatter radar and using it to detect meteors becomes a favorite instructional module in school systems across the United States (and potentially the world), there may be some interest within NASA to remotely obtain the meteor count data from participating schools. This may mean the development of something similar to a “WeatherBug” station where participating schools would have their station counts on-line for anyone to view and for NASA to retrieve electronically. Right now this is only forward thinking, however, and no money has been identified for this purpose.

There are a number of different receivers that can be used for a meteor radar. The only real requirement is that you can tune to 54-88 MHz and demodulate a SSB (single side band) or CW (continuous wave – or Morse code) signal. We have found that the ICOM computer-controlled PCR-1000 works very well. You can purchase an ICOM PCR-1000 from most any ham radio supply house. They are currently selling in the $350-$400 range. We have also used the more expensive ICOM R8500 receiver. Most of the amateur radio manufacturers produce receivers with the appropriate capabilities. A web search for general coverage receivers will turn up numerous vendors.

Since we are receiving television video carrier signals, any TV antenna will work. We have used plain old rabbit ear style antennas for our portable operations during our Leonid optical observation campaigns. We have found that a simple 2 element Yagi antenna provides the best gain/field of view combination but have also used a higher gain 6 element cut-to-frequency commercial TV antenna. A good compromise is a VHF or VHF/UHF multi-element TV antenna like those available from Radio Shack. Frequency selection is discussed later in this document. In order to receive meteor echoes from any transmitter on the chosen frequency, the antenna should be pointed toward the zenith (directly overhead). This works best for us since there are several transmitters placed around us in the southeast U.S. If you live in an unpopulated part of the country, you may want to point the antenna toward the horizon in the direction of your chosen TV transmitter. You shouldn’t be able to hear the video carrier unless a meteor occurs in the proper part of the sky.

The pictures below shows a simple wire 2 element Yagi suspended on a PVC pipe frame. The diagram following them gives the dimensions and details. The gamma match was calculated from the YagiMax software and adjusted for minimum standing wave ratio using an antenna analyzer. If you are not familiar with antenna construction and adjustment, contact your local amateur radio club and request the help of a ham operator. They know all about this stuff and would be delighted to help. 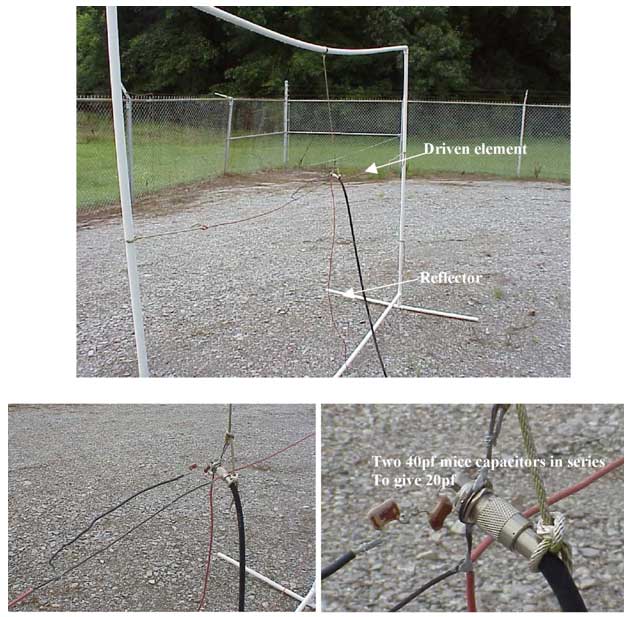 Note that in the pictures, the antenna is supported with a PVC frame and rope. An antenna like this shouldn’t cost more than $20 to build.
If you need additional help, try this website: http://www.kwarc.on.ca/tech/j-pole.html. It has directions on how to build an antenna as well. 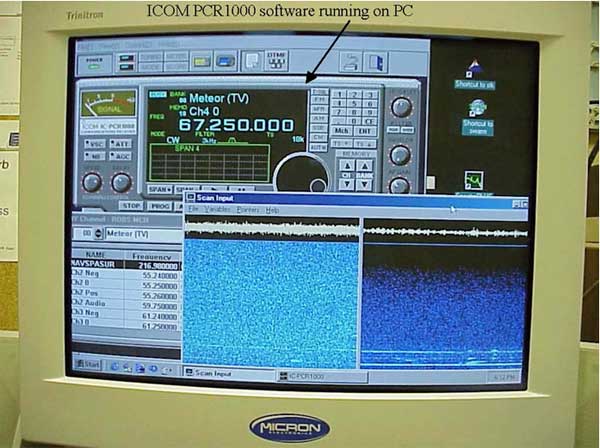 One of the nice things about this setup is that it will run on a 486 computer. However, you would be better served with a Pentium II or better running at 450Mhz or higher. A sound card is necessary because that is how the audio data from the receiver is transferred in. You will also need an RS232 port on the computer to connect to the PCR-1000 for configuration. The photo above shows the PCR-1000 control screen and the frequency display from the SpectroGram FFT software (available on the Internet).

To connect the system together, you will need the following:
1) Coax cable to connect the receiver to the antenna 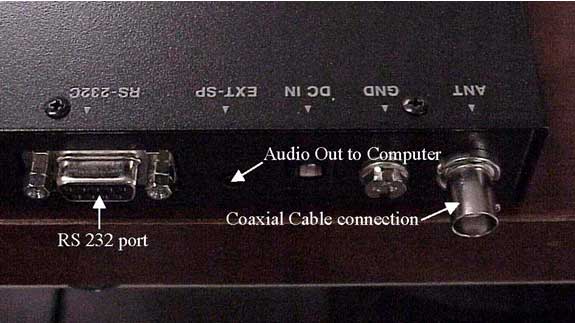 2) RS232 cable to connect the receiver to the computer, if using a computer-controlled receiver. (Note: This cable comes with the PCR-1000 receiver) 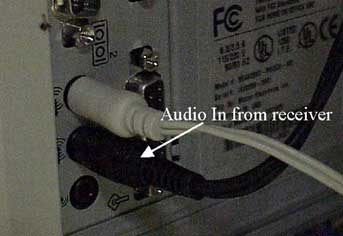 3) Mini stereo male-male to connect the receiver audio output to the sound card in your computer.

There are several things you need to take into account when deciding what frequency to tune your receiver to. Ultimately a little trial and error will be required to get the optimal setup. The most important consideration is that the received power from a meteor is proportional to the cube of the wavelength. So, the lower the frequency, the better. In practice, the lower VHF range of TV stations, channels 2 – 6, are the best. Going to the higher frequencies reduces the strength of the meteor echoes; you may have to if you live in a highly populated area where there are strong carriers on all the low VHF frequencies. Remember, you want a frequency where you can’t hear any strong carriers until a meteor meets its fiery demise.

The first thing you want to do is get an idea of the television transmitting stations around you. Frequencies of stations in the immediate area will not be good to use as the signal will swamp any returns you may get. The frequency of stations a few hundred miles away work very well. At MSFC, we chose the channel 4 zero offset video carrier, which is 67.25 MHz.

Additional information on all of the television frequencies and frequency allocations can be found at the following website:
http://www.tvtower.com/Commercial%20Television%20Frequencies.html

Included in the list of resources below is an Excel file with all the channel 2 – 6 VHF TV stations in the U.S., Canada, and Mexico. The spreadsheet contains 2 worksheets: “Rcvr Location” should be updated with your latitude and longitude then “TV database” will contain all of the TV stations and their ranges from you. You can sort the worksheet by frequency, offset frequency, and range to find your candidate transmitting stations. Note that there are 3 video carrier frequencies associated with each TV station. They are the zero offset (xx.250 MHz), positive offset 10 kHz above (xx.260 MHz), and negative offset 10 kHz below (xx.240 MHz). The table below gives the zero offset carrier frequencies for several TV channels. 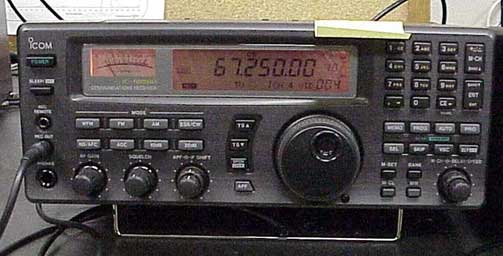 (A receiver tuned to the TV Channel 4 video carrier)

If you tune to any of these frequencies and hear a loud buzz, you are too close to a transmitter on that frequency and need to try another one. In very populated parts of the country, it may not be possible to find a clear frequency.

If using a SSB detector, the receiver must be tuned about 1-2 KHz to one side (depending on upper or lower sideband) of these frequencies so an audio tone can be heard. A CW detector puts a tone at approximately 600-700 Hz when tuned exactly to the video carrier frequency. This is recommended.

At any given carrier frequency several tones offset by 10s to 100s of Hz may be audible. These are different TV stations. We have 4 to 6 different frequencies in our audio passband due to the various transmitters in the southeastern part of the U.S.. Find a frequency from the list above, which is relatively quiet, and listen for “pings” from meteors. These are most numerous near sunrise – this is a good time to tweak your system.