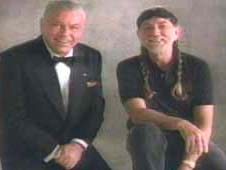 Frank Sinatra and Willie Nelson
Crooner Frank Sinatra and country legend Willie Nelson talk about some of the many medical advances that have come about as a result of the Nation’s aerospace investments. As the two singers point out, doctors have adapted many of the same methods astronomers use for interpreting the often intimidating expanse of space to studying the body, resulting in advanced medical imaging technologies. They also describe a miniature fluid pump designed originally for the Mars Viking Missions that was adapted for use as an implantable insulin delivery system.