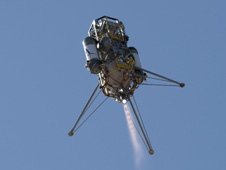 Masten Space Systems "Xombie" vehicle during the Lunar Lander Challenge. Credit: NASA/Tony Landis.
The team flew their “Xombie” vehicle on two consecutive flights of over 90 seconds duration in an elapsed time of one hour and forty minutes at their test facility at the Mojave Air and Space Port in California. The Masten team made a previous attempt for the prize on Sept. 16 in which they only completed one flight, although it was one with a very accurate landing. They continued their string of accurate landings and achieved an average accuracy of approximately 16 cm. on the two flights on Wednesday morning. In their three competition flights to date, all of their landings have been less than one foot from the target.

The Level One Second Prize amount is $150,000 and it will be awarded to the Masten team unless another team also qualifies and surpasses the landing accuracy achieved in this attempt by Oct. 31. Two other teams have scheduled attempts for the last week of October, BonNova on Oct. 26-27 and Unreasonable Rocket on Oct. 30-31. Those two attempts will be at Cantil, CA. The Level One First Prize of $350,000 was captured in 2008 by Armadillo Aerospace in Las Cruces, NM.

In order to qualify for the Level One prize in the Lunar Lander Challenge, the rocket vehicle must lift off from one concrete pad, ascend to approximately 50 meters, travel horizontally and then land on a second pad. After refueling at that pad the vehicle must repeat the flight back to a landing at the original pad all within two hours and fifteen minutes. The vehicle must remain aloft for at least 90 seconds on both flights.

Masten’s Xombie vehicle (officially called XA-0.1B) uses liquid oxygen and isopropyl alcohol as propellants. A unique feature of the vehicle is its engine, which is constructed almost entirely of aluminum. They have conducted over thirty tethered test flights but their first free flight of this vehicle only occurred on Sept. 15, 2009.

The Masten team has scheduled an attempt for the Level 2 prize for Oct. 28-29 with a different vehicle, called XA0.1E or “Xoie”. Armadillo Aerospace already qualified for first prize in Level Two on Sept. 12 but other teams can still move into first place with a successful flight and better accuracy or claim the second prize. The first prize is $1,000,000 and second prize is $500,000.

The Lunar Lander Challenge is one of six current Centennial Challenges managed by the NASA Innovative Partnership Program. The Regolith Excavation Challenge will be held on Oct. 17-18 at the Ames Research Center. The Astronaut Glove Challenge will be held on Nov. 18 and 18 in Titusville, Florida. We expect to have the Power Beaming within the next month but details are not yet finalized. The Green Flight Challenge for super-efficient aircraft will conclude in July 2011 in Santa Rosa, California.