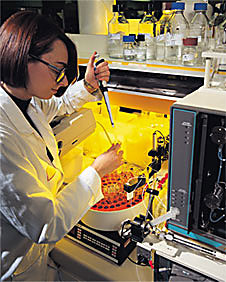 A groundwater treatment technology developed at NASA Kennedy Space Center has won NASA's Government Invention of the Year and Commercial Invention of the Year awards for 2005. This marks the second time in three years that KSC inventors have won both awards. The Emulsified Zero-Valent Iron (EZVI) technology was developed by a team of researchers from NASA and the University of Central Florida. NASA inventors include Dr. Jacqueline Quinn, an environmental engineer in the Applied Sciences Division for the Kennedy Supplied Technology Directorate; and Kathleen Brooks, an analytical chemist in the center's Materials Science Laboratory of the Center Operations Directorate. Drs. Christian Clausen, Cherie Geiger and Debra Reinhart are co-inventors from the University of Central Florida's Departments of Chemistry and Civil Environmental Engineering.

During the early history of the space program, areas of Launch Complex 34 at KSC were polluted with solvents used to clean Apollo rocket parts. The solvents were classified as Dense Nonaqueous Phase Liquids (DNAPLs). Left untreated in the ground, DNAPLs are able to contaminate fresh water sources. DNAPLs are a common cause of environmental contamination at thousands of DOE, DOD, NASA, and private industry facilities. NASA's EZVI technology provides a method to remove the contaminant that is quick, effective, and cost-competitive. EZVI involves placing nano-scale zero-valent iron particles into a surfactant-stabilized, biodegradable water-in-oil emulsion. This emulsion is injected into the DNAPL-contaminated zones of the subsurface. The DNAPL is then pulled into the emulsion where the contaminant reacts with the zero-valent iron. Through a process known as reductive dehalogenation, the DNAPL and its daughter products are degraded into ethane and other hydrocarbons. These by-products are finally broken down through biological activities in the subsurface.

The technology has been licensed to several companies for commercialization. For further information on the technology see EZVI.