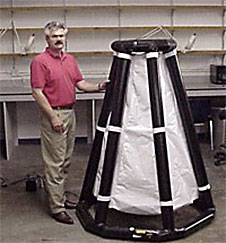 Prototype of the Inflatable Aeroponic System for space and micro-gravity food production
Aeroponics International's (AI)innovation is a self-contained, self-supporting, flexible low-mass aeroponic crop production unit with integral environmental systems for the control and delivery of a nutrient/mist to the roots. This FLEX Aeroponic System model was developed for commercialization as a result of the NASA SBIR Phase I contract for the research and development of a low-mass, Inflatable Aeroponic System (IAS) for producing pesticide-free lettuces, grains, peppers, tomatoes and other vegetables. The innovation addresses the needs of water and nutrient delivery systems technologies for food production in space. The inflatable nature of the innovation makes it lightweight, allowing it to be deflated so it takes up less volume during transportation and storage. It improves upon AI's current aeroponic system design using flexible low mass materials and takes advantage of vertical inclines to increase bio-mass production by over 600%.

Commercial Benefits
The low-mass inflatable aeroponic food production technology has not yet been used in the space program. However, it has the potential for integration for lunar and Mars applications. Spin offs of the design and materials are now being made for commercial agricultural applications to be utilized for food production. Each Flex Aeroponic System can produce 1000 bunches of lettuce, herbs, and vegetables in less than 25 days. It utilizes 99.9% less water than hydroponics and grows the plant is a true aeroponic system of 100% oxygen found in air. It is a plant and harvest system allowing for companion plantings of numerous crops. Crops can now be economically grown in half that time needed by hydroponics, NFT and soil based systems. The crops are grown in an enclosed life support system at higher densities without the need for harmful pesticides and 50% less minerals and nutrients. This advance crop production technology is important in the containment of pharmalogical crop pollen and effluents from the food chain and the watershed. It allows commercial food producers to eliminate the need for greenhouses and to grow in climate controlled buildings for year around crop production.

Partnership Contributions
Aeroponics International licensed the patent rights of the technology to its parent company, AgriHouse, Inc. Prototypes developed during the Phase I contract in 1999 were delivered to AgriHouse, Inc. which allowed them to commercialize the technology for a low-mass flex aeroponic growing system for both low gravity and terrestrial gravity applications for rapid crop production and expansion. In early 2005, the company began manufacturing of the Flex Aeroponic System that are modular and that incorporate the major advances of the Phase I work.

IPP Role
Richard J. Stoner II of Aeroponics International was the Principal Investigator for the Phase 1 SBIR contract through Kennedy Space Center's SBIR/STTR Program to address NASA's need for a more precise control of the micro-environment for rapid crop expansion using low-mass materials. These programs are managed under NASA's Innovative Partnership Program through Kennedy Space Center's Technology Transfer Office. The PI's subcontractor was BioServe Space Technologies, a NASA commercialization center, located on the campus of the University of Colorado.