Grow Text SizeShrink Text Size
Radiation Belt Storm Probes (RBSP)
The Radiation Belt Storm Probes mission is part of NASA’s Living With a Star Geospace program to explore fundamental processes that operate throughout the solar system, in particular those that generate hazardous space weather effects near the Earth and phenomena that could affect solar system exploration. 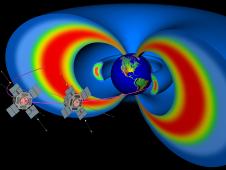 Image Credit: NASA RBSP is being designed to help us understand the sun’s influence on the Earth and near-Earth space by studying the planet’s radiation belts on various scales of space and time.

Understanding the radiation belt environment and its variability has extremely important practical applications in the areas of spacecraft operations, spacecraft and spacecraft system design, mission planning, and astronaut safety.

The mission’s science objectives are to:


The instruments on the two RBSP spacecraft will provide the measurements needed to characterize and quantify the processes that produce relativistic ions and electrons. They will measure the properties of charged particles that comprise the Earth’s radiation belts and the plasma waves that interact with them, the large-scale electric fields that transport them, and the magnetic field that guides them.

For more information: RBSP website
Review Status: The RBSP mission has successfully completed their Preliminary Design Review (PDR), Critical Design Review (CDR) and System Integration Review (SIR) reviews. The Project is expected to come in on cost and schedule. The Operational Readiness Review (ORR) is scheduled for February 2012 and the Launch is schedule for May 2012 (updated 1/21/11).
Review Manager: Cynthia Bruno
› Back To Top