Grow Text SizeShrink Text Size
ExoMars/TGO (Mars 2016) Project
NASA-funded researchers are refining a tool that could not only check for the faintest traces of life's molecular building blocks on Mars, but could also determine whether they have been produced by anything alive. 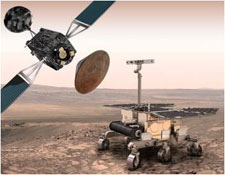 The Urey instrument: Mars Organic and Oxidant Detector, has already shown its capabilities in one of the most barren climes on Earth, the Atacama Desert in Chile. The European Space Agency has chosen this tool from the United States as part of the science payload for the ExoMars rover planned for launch in 2013. The European Space Agency plans for the ExoMars rover to grind samples of Martian soil to fine powder and deliver them to a suite of analytical instruments, including Urey that will search for signs of life.

Each sample will be a spoonful of material dug from underground by a robotic drill. The instrument will determine if it is possible for life to survive on Mars today or if chemicals present on the surface of Mars destroy life and any evidence of past life. The potential habitability of Mars has been bolstered by recent discoveries of subterranean life deep below Earth's surface.

Review Status: The ExoMars was chartered as a project review by the Mars Exploration Program in SMD. The ExoMars SRR was conducted in July, 2011, and the results presented to the DPMC in November 2011.
Review Manager: Kaiser Adeni
› Back To Top