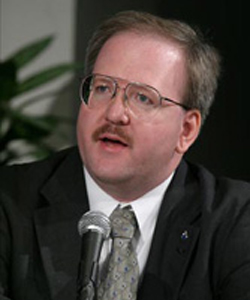 Jeff Greason has 17 years experience managing innovative technical project teams at XCOR Aerospace, Rotary Rocket and Intel Corporation. As president and a co-founder of XCOR, he leads the engineering team that has developed ten different long-life, highly-reusable liquid-fueled rocket engines, a low-cost liquid propellant piston pump, and two manned reusable rocket aircraft – the EZ-Rocket and a prototype for a private customer. As part of his duties at XCOR, Mr. Greason has had the final go/no-go decision responsibility on hundreds of rocket engine test firings, more than twenty manned rocket flights, and has served as a flight test engineer aboard one of those flights.

Mr. Greason is the co-inventor of XCOR’s Nonburnite technology, which combines aerospace fabrication practices with materials common in the semiconductor industry. Mr. Greason fabricated the first exploratory materials coupons in 2002 and is still directly supervising the coupon development work taking place at XCOR. He is intimately familiar with every aspect of the materials development to date.

Greason previously hired and managed the propulsion team at Rotary Rocket, where he led technical development of the company’s rocket engines from 1997 through 1999. Prior to joining Rotary Rocket, Greason developed leading-edge techniques to prepare new generations of Intel computer chip designs for mass production, dramatically shortening the time from architecture to customer-ready product. Intel management presented Greason with a coveted Intel Achievement Award for his work on BiCMOS technology, which later became the basis for the Pentium processor.

Greason, a recognized expert in FAA/AST reusable launch vehicle (RLV) regulations, led XCOR Aerospace’s licensing efforts until they were completed in early 2003, and remains deeply involved. In July 2003, he testified before the joint House/Senate subcommittee hearings on “Commercial Human Spaceflight.” Greason has maintained a close working relationship with AST since the 1998 Notice of Proposed Rulemaking on RLV licensing. He has been a member of the COMSTAC RLV working group since 2000 and now serves on the full COMSTAC. He is a co-founder and vice-chairman of the Personal Spaceflight Federation, a trade association for innovative launch companies.

Greason was cited by Time magazine in 2001 as one of the “Inventors of the Year” for his team’s work on the EZ-Rocket. He holds 18 U.S. patents. He graduated with honors from the California Institute of Technology in Pasadena.