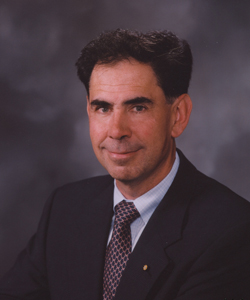 Edward Crawley is the Ford Professor of Engineering at MIT, and is a Professor of Aeronautics and Astronautics and of Engineering Systems. He received an SB (1976) and an SM (1978) in Aeronautics and Astronautics, and an ScD (1981) in Aerospace Structures from MIT. He currently serves as the Director of the Bernard M. Gordon – MIT Engineering Leadership Program, an effort to significantly strengthen the quality of engineering leadership education for competitiveness and innovation. From 2003 to 2006 he served as the Executive Director of the Cambridge – MIT Institute, a joint venture with Cambridge University, funded by the British government and industry, with a mission to understand and generalize how universities act as engines of innovation and economic growth. In this capacity he was in close consultation with the British Government on issues of science and innovation policy. For the previous seven years, he served as the Department Head of Aeronautics and Astronautics at MIT, leading the strategic realignment of the department.

Dr. Crawley's earlier research interests centered on structural dynamics, aeroelasticity and the development of actively controlled and intelligent structures. He is the author of numerous journal publications in the AIAA Journal, the ASME Journal, the Journal of Composite Materials, and Acta Astronautica. Credited with being one of the early contributors to the field of active structural control, several of these publications have over 100 citations, and one over 700. For his work in the field, Professor Crawley was awarded both the AIAA Structures, Structural Dynamics and Materials Award, and the ASME Adaptive Structures Medal. He is co-author of two books in the field.

Recently, his research has focused on the domain of architecture, design and decision support in complex technical systems that involve economic and stakeholder issues. His work spans a range from the development of underlying theory, typified by a recent paper on the Algebra of Systems, to the development of methods and tools, such as Object Process Networks and Architecture Decision Graphs. It extends as far as a consulting role on the design of actual systems. Currently he is engaged with NASA, on the design of its lunar and earth observing systems, and with BP on oil exploration system designs.

As an educator, Professor Crawley has won numerous teaching awards, including being selected in 1992 as among the first class of MacVicar Faculty Fellows at MIT. Serving as the first co-director of engineering, he helped found the International Space University, now in Strasbourg, France. He was the founding co-director of the System Design and Management Program, leading to a degree jointly offered by the School of Engineering and Sloan School of Management at MIT. He is the founding co-director of an international collaboration on the reform of engineering education, and the lead author of the recent book – Rethinking Engineering Education, the CDIO Approach.

In his outreach and public service, Dr. Crawley has served as chairman of the NASA Technology and Commercialization Advisory Committee, and was a member of the NASA Advisory Committee. He holds the NASA Public Service Medal. In 1993 he was a member of the Presidential Advisory Committee on the Space Station Redesign. He has served on numerous committees of the National Research Council, and recently co-chaired the committee reviewing the NASA Exploration Technology Development Program. He is a member of the Committee on Science, Engineering and Public Policy of the National Academies. He is conversant in Russian, and has spent time as a visitor at the Moscow Aviation Institute, the Beijing University of Aeronautics and Astronautics, Stanford University and Cambridge University. In December 2008 he was appointed as a Guest Professor at Tsinghua University in Beijing. He was a finalist in the NASA Astronaut selection in 1980, is an active pilot, and was the 1990, 1995 and 2005 Northeast Regional Soaring champion. In 2004 he received the Distinguished Eagle Scout Award of the Boy Scouts of America.

A founder of ACX, a Cambridge based product development and manufacturing firm, he served as its Chairman and Chief Technology Officer of from 1992 to 2000, at which time it was acquired by Cymer, Incorporated (CYMI). He is a founder and the Chairman of BioScale, a company developing biomolecular detectors. In the summer of 2007 he founded and serves on the Board of Dataxu, a Cambridge based company in Internet Advertising Matching. In addition, he has served on the boards and advisory boards of numerous other entrepreneurial ventures.