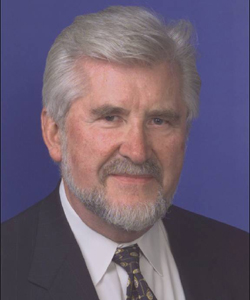 
Bohdan (Bo) I. Bejmuk is an aerospace consultant with in-depth knowledge of space systems and launch vehicles. Presently he is the Chairman of the Standing Review Board for the new NASA Constellation Program.

Mr. Bejmuk retired from the Boeing Company in 2006, where he was the Space Shuttle Orbiter Program Director, responsible for all Orbiter Engineering effort in support of the Shuttle Program. During Space Shuttle development and early operations he served as the Program Manager for Shuttle’s System Engineering and Integration.

On Sea Launch, an international joint venture, he was the Executive Vice President and Chief Engineer directing all aspects of development for the company, leading the effort of several thousands of American, Russian, Ukrainian and Norwegian engineers and shipyard workers. After completion of the development, he was the manager of Sea Launch operations at Home Port in Long Beach, California and at the launch region in the Pacific Ocean.

Mr. Bejmuk served in numerous positions of responsibility at Rockwell International since 1974 and at Martin Marietta prior to that.

Mr. Bejmuk received a BSME from the University of Colorado in 1964 and an MSME from the University of Colorado in1967. He speaks English, Russian, Ukrainian, French, Polish, and Spanish. His honors include: Membership in the International Academy of Astronautics, the Lloyd V. Berkner Award, Aviation Week 1999 Laurels Award, twice received the National Public Service Medal from NASA, the Rockwell International Presidents Award, and Eminent Engineer, awarded by the California Institute of Technology.