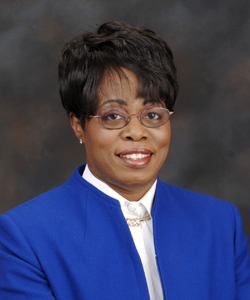 President and CEO of The Aerospace Corp.

Before being named senior vice president, Austin was general manager of the Military Satellite Communications (MILSATCOM) Division, where she was responsible for systems engineering support to the Air Force in the architecture, acquisition, development, and orbital operation of advanced satellite communications systems and programs. She was general manager of the Electronic Systems Division before her assignment to the MILSATCOM organization. Before joining Aerospace, Austin was a member of the technical staff at Rockwell International. She is internationally recognized for her work in satellite and payload system acquisition, systems engineering, and system simulation.

Austin has received numerous awards and citations. Among them are the National Intelligence Medallion for Meritorious Service, the Air Force Scroll of Achievement, the National Reconnaissance Office Gold Medal, the U.S. Air Force Meritorious Civilian Service Medal, the Air Force Space and Missile Systems Center’s Martin Luther King Spirit of the Dream Award, and the 2009 Black Engineer of the Year Award. She was inducted into the WITI (Women in Technology International) Hall of Fame in September 2007. In 2008, Dr. Austin received a Special Achievement Award from the 100 Black Men of Los Angeles.