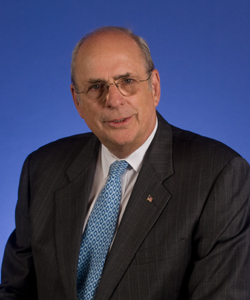 In 1958 he joined the Douglas Aircraft Company in California where he worked as a Research Engineer, Program Manager and Chief Engineer. Beginning in 1965, he served in the Office of the Secretary of Defense as Assistant Director of Defense Research and Engineering. He joined LTV Missiles and Space Company in 1970, serving as Vice President, Advanced Programs and Marketing. In 1973 he returned to the government as Assistant Secretary of the Army and in 1975 became Under Secretary of the Army, and later Acting Secretary of the Army. Joining Martin Marietta Corporation in 1977 as Vice President of Technical Operations, he was elected as CEO in 1987 and chairman in 1988, having previously been President and COO. He served as president of Lockheed Martin Corporation upon the formation of that company in 1995, and became CEO later that year. He retired as chairman and CEO of Lockheed Martin in August 1997, at which time he became a Lecturer with the Rank of Professor on the faculty of Princeton University where he served until July 1999.

Augustine served on the President’s Council of Advisors on Science and Technology under Democratic and Republican presidents and led the 1990 Advisory Committee on the Future of the U.S. Space Program and the 2005 National Academies commission that produced the landmark report, Rising Above the Gathering Storm: Energizing and Employing America for a Brighter Economic Future.

Mr. Augustine has been presented the National Medal of Technology by the President of the United States and received the Joint Chiefs of Staff Distinguished Public Service Award. He has five times received the Department of Defense's highest civilian decoration, the Distinguished Service Medal. He is co-author of The Defense Revolution and Shakespeare In Charge and author of Augustine's Laws and Augustine’s Travels. He holds 23 honorary degrees and was selected by Who’s Who in America and the Library of Congress as one of “Fifty Great Americans” on the occasion of Who’s Who’s fiftieth anniversary. He has traveled in over 100 countries and stood on both the North and South Poles of the earth. (Rev: July 2008)