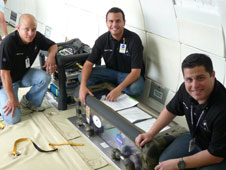 CANM supports faculty, research and students; performs targeted institution research; and builds academic infrastructure while making a significant contribution to the objectives of the NASA Education portfolio. CANM is improving the ability of three Hispanic-serving institutions, strategically distributed across the jurisdiction, to enhance their research competencies in NASA-relevant areas and to compete for NASA research and development work.

CANM's research is organized into four Interdisciplinary Research Groups (IRGs) aligned with NASA's Vision for Space Exploration:
In coordination and collaboration with NASA and JPL scientists, a mechanism has been implemented to advance research projects along the Technology Readiness Level (TRL) scale from TRL 1 to TRL 3. Projects reaching TRL 3 will be jointly evaluated to determine whether they should be developed into TRL 4 (or above) and transferred to a NASA Center or JPL.