Grow Text SizeShrink Text Size
Moonbase Alpha Overview
NASA has once again landed on the lunar surface with the goal of colonization, research, and further exploration. Shortly after the return to the Moon, NASA has established a small outpost on the south pole of the moon called Moonbase Alpha. Utilizing solar energy and regolith processing, the moonbase has become self-sufficient and plans for further expansion are underway. 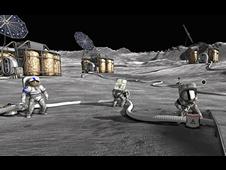 In Moonbase Alpha, you assume the exciting role of an astronaut working to further human expansion and research. Returning from a research expedition, you witness a meteorite impact that cripples the life support capability of the settlement. With precious minutes ticking away, you and your team must repair and replace equipment in order to restore the oxygen production to the settlement.

Team coordination along with the proper use and allocation of your available resources (player controlled robots, rovers, repair tools, etc.) are key to your overall success. There are several ways in which you can successfully restore the life support system of the lunar base, but since you are scored on the time spent to complete the task, you have to work effectively as a team, learn from decisions made in previous gaming sessions, and make intelligent decisions in order to top the leaderboards.
Back to Moonbase Alpha Home
› Back To Top