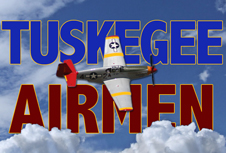 Please take a few moments of your time to provide feedback via the forms located below.

Focus Question(s): What were some of the challenges faced by early African-American aviators? Who are the Tuskegee Airmen?

Description: This elite group of African American pilots defined their pivotal role during World War II. These pilots fought war and racism with one of World War IIs greatest weapons, the science of the P-51 Mustang fighter aircraft.

Focus Question(s): When did World War II begin? How were the Tuskegee Airmen affected by the causes and consequences of World War II?

Description: The onset of World War II spurred the aerospace industry, one of America’s most notable accomplishments. Aircraft's were plentiful but pilots were scarce. Technology supported the Tuskegee Airman’s victory over Nazism and Fascism in the European skies and racism on American soil.

Focus Question(s): African-Americans were denied equal rights and protection in their own country, yet they served and flourished in the U.S. Armed Forces during World War II. Why did they serve in the military and what was life like for the Tuskegee Airmen?

Description: Moton Field in Tuskegee, Alabama became the historic site that launched proof that African Americans could fly and maintain sophisticated combat aircraft. Engineering schools such as the Tuskegee Institute provided the edge needed for African Americans to make a significant impact during World War II.

Focus Question(s): How many African Americans served in the U.S. during World War II? What heroics did the Tuskegee Airmen achieve?

Description: Over 900 men graduated as pilots from the Tuskegee Institute pilot training program. The elite class of airmen was granted the opportunity to fuel flight success with calculated risks.

A limited number of schools will be able to participate during the live Special Event Series. Although all schools are able to watch via live streaming. Please review the events above and provide the needed information to Karen Ricks at Karen.Ricks@NASA.gov if you are interested in interacting with the Tuskegee Airmen during the broadcast.

* Topic name you wish to be considered for interactive participation

* Number of students and teachers participating

Requests will be taken on a first come first serve basis.

Post-Conference Activities As a follow-up to this event a list of activities has been provided:

National Center for History in the Schools

National Counsel for the Social Studies

I.e. Articulate the implications of cultural diversity, as well as cohesion, within and across groups.

II.d. Compare and contrast different stories or accounts about past events, people, places, or situations, identifying how they contribute to our understanding of the past.

VI. Power, Authority, and Governance -- Experiences that provide for the study of how people create and change structures of power, authority, and governance.

Explain and apply ideas, theories, and modes of inquiry drawn from political science to the examination of

VI.i. Evaluate the extent to which governments achieve their stated ideals and policies at home and abroad.

VI.j. Prepare a public policy paper and present and defend it before an appropriate forum in school or community.

IX.e. Analyze the relationships and tensions between national sovereignty and global interests, in matters such as territory, economic development, nuclear and other weapons, use of natural resources, and human rights concerns.

Examine strategies designed to strengthen the "common good", which consider a range of options for citizen action.

* Understandings About Science and Technology

History and Nature of Science Grades 4-8

* Science as a Human Endeavor