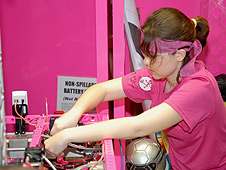 Image: A member of the "Pink Team" works on the team's robot for the FIRST regional competition held at the University of Central Florida. Photo credit: NASA/Jim Grossmann
› Larger image 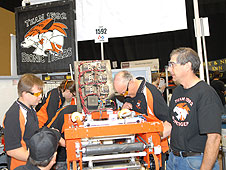 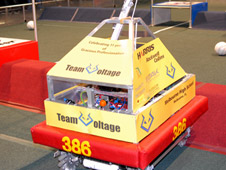 
Family and friends cheered and occasionally broke into a frenzied version of "the wave," while several Brevard County school teams competed in the For Inspiration and Recognition of Science and Technology Robotics, or FIRST, competition.

Inside the University of Central Florida's giant arena in Orlando on March 12 and 13, student teams checked and rechecked their robot creations before sending them into a ring for a variation of a three-on-three soccer match. The competition was the culmination of six weeks' worth of work with mentors who helped design and build the robots.

Marion Passmore, a math and robotics teacher at Rockledge High started a FIRST team in 1999, and continued it as student interest expanded to other schools. Now, the Pink Team includes 45 students from three high schools.

"The FIRST competition is more than learning how to build a robot. It's about inspiring kids," Passmore said.

At the regional competition in Los Angeles, the Pink Team won an Imagery Award and placed in the top eight teams during the semifinal competition.

Bionic Tigers' mentor Bill Benson is an engineer with NASA's Launch Services Program at Kennedy. He said he enjoys working with students and passing on his knowledge to help them seek fulfilling careers in the science, technology, engineering and math, or STEM, fields.

"The competitions are an absolute blast, and helping the students build something and getting it to work well is very satisfying," Benson said.

During the regional competition in Denver, the 15-member Bionic Tigers team won the Industrial Design Award and competed in the semifinals.

"They apply what they learn in the classroom to design a robot to overcome a challenge and also learn how important teamwork is," Valencia said. "The students work with mentors who are engineers, scientists and technicians."

This year, Kennedy co-sponsored the Florida regional competition and provided live Web casts during the competition.

FIRST was founded in 1989 by inventor and entrepreneur Dean Kamen to inspire the interest and participation of young people in science and technology.

Nationwide, more than 60,000 volunteers make FIRST happen, supported by a network of more than 2,000 individuals, corporations, and educational and professional institutions. There are about 1,300 FIRST teams worldwide.