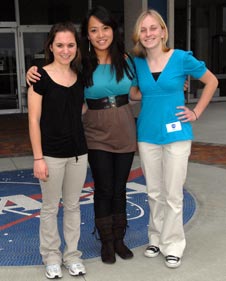 Sometimes when high school seniors team up to do a project, one person does all the work while the others sit back and enjoy the easy grade. That's not the case with the winning team of the 2009 No Boundaries competition.

In fact, team members Julie, Jean, Tatiana and Kaitlyn consider each other best of friends and did their individual best to not let their team down.

"The way it all came together was really nice," Tatiana said. "We all took care of our own little part and it came together really well."

NASA collaborated with USA TODAY on the education initiative to encourage students to explore careers in science, technology, engineering and math, while learning about NASA.

The group from Wisconsin topped a field of 151 entries representing more than 500 students. Their winning research project on astrobiology included the creation of a Web site.

Jean came up with the idea of a Web site and knew from the beginning that it needed to be relevant to teenagers.

"We based it on a DNA theme," Jean said. "Our topic just seemed so promising and interesting."

The top award carried with it a $2,000 prize. Their ultimate reward came in the form of a VIP tour Nov. 10-12 of the facilities at NASA's Kennedy Space Center in Florida, including Launch Pad 39A where space shuttle Atlantis was awaiting liftoff, and the Space Station Processing Facility where station components are prepared for launch.

The team and its sponsoring teacher, Dr. Jean Weaver, also had an opportunity to present their award-winning project to NASA staff.

Kaitlyn, who composed all the music for the Web site, didn't make the trek down to Kennedy. Instead, she used her share of the prize money to buy some music composition software.