NASA's Education Office sponsored a Minority Student Education Forum for fifth-through 12-graders, from July 27 to 29, to fuel the minds of hundreds of minority students. Each day, the students experienced a new adventure, such as touring NASA Kennedy Space Center facilities, seeing the Visitor Complex, and meeting some of NASA's greatest legends and trailblazers. Their message: It's never too late to follow your dreams.

"What helped me was imagination and desire . . . you have advantages that we didn't have," Isaac Gillam, the former director of NASA's Dryden Flight Research Center, told the students.

"Develop a passion for something you like to do, learn to do it well, stay on top of what's going on and be prepared for what's coming next . . . because you never know, you could be next," said Katherine Johnson, who calculated the trajectory of Alan Shepard's first flight into space, Mercury 7, in May 1961. She also graduated high school at the age of 14 and college at 18. 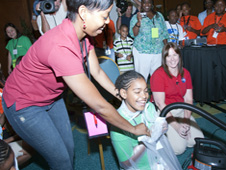 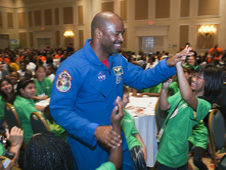 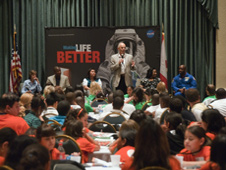 
Keosha, a rising 10th-grader at Andrew Jackson High School, is taking Katherine Johnson's message to heart. She hopes to one day be a gynecologist and would like to open a hospital that provides free healthcare to everyone, regardless of age, sex and ethnicity. It may sound like a far-off dream, but the point of the forum was to dream big, reach for the impossible, and spread your wings and fly.

"You've heard the old law of physics that a bumble bee can't fly. Every aerodynamic principle says that its wing span is too short to support its massive body in flight," Earls said. "But a bumble bee doesn't know that. It never took physics. It just flies around all over the place and that's what you have to do."

This forum wasn't Rafael's first experience with a STEM program sponsored by NASA. The rising ninth-grader from Puerto Rico said he helped build a robot for the Vex Robotics Competition with his team, "Cybergenetic," which took home first place in a regional competition. He said he wants to be an aerospace engineer, so touring Kennedy Space Center was quite a treat.

"They gave us a tour of the Saturn V Complex and the Space Station Processing Facility . . . and I'm amazed at what people can do," Rafael said.

Victoria, a rising seventh-grader from Austin Middle School, said she was stunned that out of all of the students in the Rio Grande Valley, she was chosen for this once-in-a-lifetime opportunity. It was a paper she wrote on advancing technology that guaranteed her a spot. In the future, she would like to be an astronaut who studies life sciences and astronomy.

"I want to experience the final frontier," Victoria said, "study life on other planets and help cure cancers, such as leukemia."

Jamian, a rising eighth-grader from Byram Middle School, said he enjoyed hearing about each trailblazers' journey. His dreams, too, are quite impressive.

"I would like to help the paralyzed walk again . . . help the blind see," Jamian said.

Some of the students must give a hands-on presentation to a local school, church or community after they return from the forum, said Pamala Heard, director of the NASA Educator Resource Center at Jackson State University. For Heard, the most important inspiration was the sentiment that it is never too late to start over.

One of Heard's students, Dusty, a rising eighth-grader from Rebul Academy, wants to help build the next generation of human spacecraft. He said he will pass along Melvin's messages about people giving their lives for technology and the need to carry on their legacy.

Melvin also laid another colossal goal before the students when he challenged them to make the world peaceful by describing his time aboard the International Space Station.

"We're having a meal in space just going around the planet at 17,500 mph, all of us sharing our food, and we're flying over Afghanistan and Iraq . . . and we're just thinking to ourselves, if more people had the opportunity to sit down and break bread together, there would be no more wars.

"The only way to break stereotypes is to have a conversation, face-to-face, one-on-one, looking in someone's eyes. And if you do it over a meal, you have the added benefit of, 'Mmmm . . . that tastes good,'" Melvin said.

The forum was part of NASA's "Summer of Innovation" initiative and the federal "Education to Innovate" campaign to increase the number of future scientists, mathematicians, and engineers. "This is about the kids, their dreams and aspirations, and hopefully leading them to an aerospace career," said Theresa Martinez, NASA's Minority University Research and Education Programs, or MUREP, Small Projects manager.

"Don't let anyone tell you can't have it all," said Christyl Johnson. "I'm living proof you can."