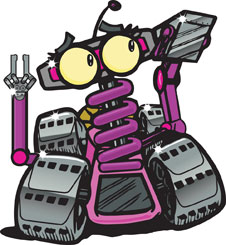 Image above: Meet Luna*Bot, the newest team member and mascot of Kennedy Space Center's Education and External Relations Directorate for the Lunabotics Mining Competition. Luna Worldwide Challenge entrants are asked to print out Luna and take pictures of her on their adventures. Image credit: NASA/Matthew Young
› View Larger Image 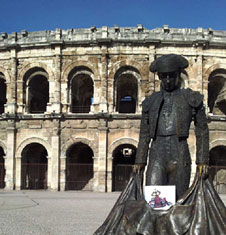 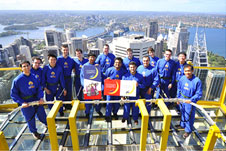 
Students around the world are gearing up for NASA's fourth annual Lunabotics Mining Competition coming up May 20-24 at the Kennedy Space Center Visitor Complex in Florida.

This year, Kennedy's Education and External Relations Directorate hopes for even greater numbers as it reaches out to students, with an emphasis on elementary school-age girls. And the group is going to try and do that with its newest member and mascot . . . Luna*Bot.

This robotic mascot will be used as an ambassador to promote the annual competition that takes place in a supersized sandbox filled with crushed basalt that has similar characteristics to lunar soil, called BP-1.

Luna*Bot was designed with most little girls' favorite colors in mind -- pink and purple.

"Luna has been invaluable in helping us to engage students in STEM- related (science, technology, engineering and mathematics) activities and create interest in the Lunabotics Mining Competition," said Bethanne Hull, Lunabotics Mining Competition supporting coordinator. "Our artist, Matthew Young, did an amazing job working the initial design concept into a mascot that has been well received."

Since her debut in December 2012, Luna*Bot has been seen in places as far away as Sydney, Australia, and the Arena of Nimes in France.

"Luna has been spotted in five countries and in some pretty unique places," Hull said. "It has been exciting for us to see how our teams have taken the challenge and really made it something remarkable."

Along with Luna*Bot, the 2013 Lunabotics team has issued a challenge . . . the Luna Worldwide Challenge. Entrants were asked to print out Luna and take pictures of her adventures. The instructions were to bring Luna and her activity sheets to outreach events, upload photos to Facebook and Twitter for everyone to see (when uploading to Twitter use the hashtag #LunaWW), and share Luna with their friends and families to add to her adventures.

The mining competition is a university-level competition designed to engage and retain students in STEM.

NASA directly will benefit from the competition by encouraging the development of innovative lunar excavation concepts from universities, which may result in clever ideas and solutions that could be applied to an actual lunar excavation device or payload.

The challenge is for students to design and build a robotic excavator, called a Lunabot, that can mine and deposit a minimum of 10 kilograms of lunar simulant within 10 minutes. The complexities of the challenge include the abrasive characteristics of the BP-1, the weight and size limitations of the Lunabot, and the ability to telerobotically or autonomously control the Lunabot from a remote mission control center.

This year, the scoring for the mining category will not be based primarily on the amount of material excavated in the allowed time but instead will require teams to consider a number of design and operational factors such as dust tolerance and projection, communications, vehicle mass, energy/power use, and full autonomy.

Some 50 teams from across the world have registered to compete for this year's grand prize, the Joe Kosmo Award for Excellence.

"I am always amazed at the camaraderie you see develop among the teams," Hull said. "It's really amazing to see such international cooperation at the university level."

To learn more about the competition, go to: http://www.nasa.gov/lunabotics

To meet Luna*Bot and her teammates, watch this video: http://go.nasa.gov/13fQSeb