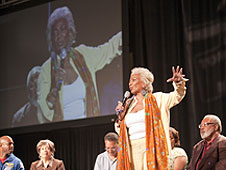 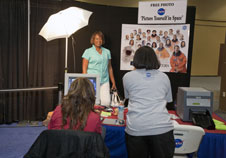 Image: Attendees of the 2010 Tom Joyner Family Reunion were photographed and then their faces were put into a NASA "Legends and Trailblazers" poster at the Gaylord Palms Convention Center in Orlando, Fla. Photo credit: NASA/Amanda Diller
› Larger image 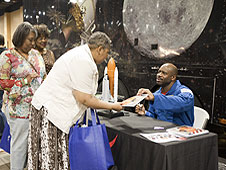 
NASA's education specialists from across the country joined a holiday weekend event hosted by radio host Tom Joyner in Orlando, Fla., to tout the benefits of math and scientific learning along with opportunities offered by the space agency.

Astronauts and STS-129 crewmates Leland Melvin and Mike Foreman were joined by actress Nichelle Nichols, who played Lt. Uhura in the original "Star Trek" series, for the event. The trio, joined by other notables, encouraged students to learn scientific, technology, engineering and math skills.

"To all the kids in here who want to be ballplayers, musicians, rappers, whatever you want to be, go for it," Melvin said. "But make sure you have the knowledge in your head so if that doesn't work out you can do or be your backup plan."

Melvin, who played wide receiver in the NFL before an injury ended his football career, noted that his backup plan was to become an astronaut, something he couldn't have done without a quality education.

They signed autographs, spoke with students and parents one-on-one and conducted a panel Sept. 5 to stoke interests and excitement as part of NASA's "Summer of Innovation" initiative.

"Just get out there and get good grades, because that's the thing," said Robyn N. Gordon of NASA's Glenn Research Center in Ohio. "If you want to work at NASA, we take the best and the brightest. We'll help build you up, but you've got to have something for us to start with to begin with."

The students and parents also got to take part in science projects, such as building a balloon-powered rocket and launching it up a string. They also tried assembling blocks using bulky gloves similar to the ones astronauts use.

"The Tom Joyner Morning Show Family Reunion was an outstanding event," said Hortense Burt, chief of Education and University Programs at NASA's Kennedy Space Center in Florida. "Thanks to Tom Joyner and his unique style of bringing education and world knowledge to the African-American community, there are now thousands of people who know about and have actually met NASA astronauts, legends, and trailblazers."

For those that might have been deterred by the thought of becoming an astronaut, but who still want to work for the agency, Melvin said there is plenty of room at NASA for skilled people.

The Tom Joyner Morning Show Family Reunion was held at the Gaylord Palms Resort and Convention Center in Orlando. More than 14,000 people were estimated to have attended. The event featured singers including "American Idol" winner Fantasia and other rhythm and blues singers. Tom Joyner hosts a nationally syndicated radio program.