Grow Text SizeShrink Text Size
GRAIL Puts MoonKAM in Students' Control
NASA will give students unprecedented control over a powerful camera that is on its way to the moon aboard the Gravity Recovery and Interior Laboratory (GRAIL) spacecraft launched last month. 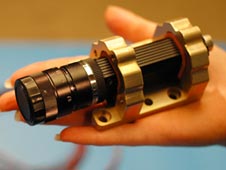 In a program led by Sally Ride, America's first female astronaut in space, middle and high school students are picking targets on the moon to photograph and study. Students from several schools in Brevard County, Florida -- home to NASA's Kennedy Space Center -- will participate in this unique learning opportunity made possible with the launching of MoonKAM, a payload on the GRAIL mission. The twin GRAIL spacecraft were launched Sept. 10, 2011, aboard a Delta II rocket from Cape Canaveral Air Force Station's Launch Complex 17B. MoonKAM (Moon Knowledge Acquired by Middle school students) is GRAIL's signature education and public outreach program. The twin GRAIL probes, each about the size of a washing machine, will take a slow, fuel-efficient path to the moon. The first spacecraft will arrive on Dec. 31 and the second on New Year's Day 2012. The twin probes will fly in formation above the lunar surface at an altitude of 34 miles. As the GRAIL satellites orbit the moon gathering scientific data, each MoonKAM system (one per spacecraft), consisting of a digital video controller and four camera heads, will be used to take images of the lunar surface. The MoonKAM mission is expected to last 82 days. MoonKAM is modeled on Sally Ride Science's successful EarthKAM (Earth Knowledge Acquired by Middle school students) mission, a NASA-sponsored education program. Formerly known as KidSat, the program began in 1996 with camera systems that enabled middle school students to photograph targets for Earth science studies. EarthKAM has flown on several space shuttle flights, the first being in 1996 aboard space shuttle Atlantis' STS-76 mission. More than 300 photos were taken during the mission. The EarthKAM camera was installed on the International Space Station during mission STS-98, part of Expedition One in February 2001 and still is in use. 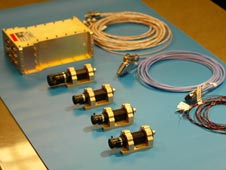 The MoonKAM system contains a digital video controller and four camera heads. This system can be used to take images or video of the lunar surface with a frame rate up to 30 frames per second. The system is provided by Ecliptic Enterprises Corporation, Pasadena, Calif. Image credit: NASA/Sally Ride Science

Beginning in March, teachers and students can set up mini-mission control centers in their classrooms for two- to four-day space exploration operations. Throughout that time, students go to an interactive MoonKAM website where they can track the orbits of the GRAIL spacecraft. Clickable topographic maps show what regions and surface features the spacecraft will be flying over. Students then select targets, gather precise latitude and longitude information, express their scientific interests and objectives, and submit their requests to undergraduate students at the University of California San Diego running the mission operations center. NASA's Jet Propulsion Laboratory in California then will carry out the request. Students from Cocoa High School, Space Coast Junior-Senior High School and Rockledge High School began their moon mission on Sept. 10 by viewing the launch of the GRAIL spacecraft at Kennedy, and will be following the lunar mission throughout the school year. Also participating in this science endeavor are students from St. Charles Borromea Catholic School in Port Charlotte, Fla. "The entire concept is to inspire and encourage these science students to continue their education into STEM [science, technology, engineering and mathematics] studies," said NASA's Beth Smith, Kennedy's education program specialist. MoonKAM also may strengthen students understanding of science and inspire the next generation of explorers. Visit the MoonKAM website. Melanie Carlson
NASA's John F. Kennedy Space Center
› Back To Top