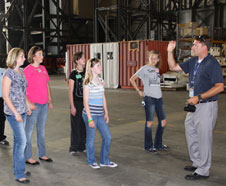 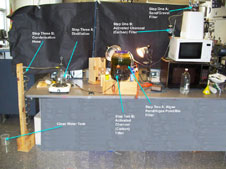 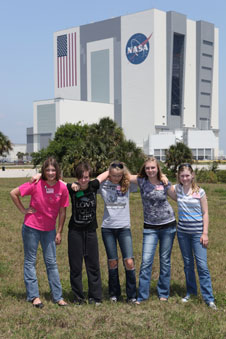 
Fifteen-hundred hours, 62 days, nine weeks, or two months -- any way you look at it, a group of Wisconsin middle school students spent a lot of time working on a winning project for NASA's 2011 Waste Limitation, Management and Recycling (WLMR) Design Challenge.

From October 2010 to May 2011, Katelyn, Brianna, Amy, Julia and Maeve, along with their mentor, Christopher Deleon, worked through lunch and after school to develop a highly advanced water recycling system.

They were all good students, but I think they went to a whole other level with this project," Deleon said of the five girls.

WLMR challenged fifth- through eighth-grade students nationwide to design and test a water recycling system that could be used in space. The reason: It's really expensive to transport critical supplies to destinations beyond Earth's atmosphere, so sustainability is the key to affordability for NASA's future expeditions.

Twenty-five teams submitted a final design, tested their systems on a simulated wastewater stream and reported results to a NASA panel comprised of three subject matter experts and three professional educators. Team QNA's Michael Roberts, a lead for Sustainable Systems Research at Kennedy, said the panel was looking for an innovative design that could function in space for long periods of time without the need for a lot of energy or re-supply.

Called "Aqua De Vida," which means "water of life" or "the fountain of youth," the winning team concocted a closed-loop water recycling system design that uses multi-stage filtration, biological treatment and distillation to mimic water recovery on Earth. Their design uses gravity to sieve wastewater through a sand and gravel filter, then through an activated charcoal filter. Filtered water then flows into a biofiltration pond containing bacteria to break down ammonia and Spirulina, a carbon-absorbing and protein-rich, edible cyanobacteria, formerly called blue-green algae. From there, the water trickles into a distillation chamber, where it vaporizes and condenses into drinkable water.

"We all had our own ideas and bringing those together was a challenge," Brianna said. "We really learned to work as a team."

Julia said this solution-seeking project has helped her realize that she would like to be a doctor someday. This solution involved more than just quantity, though; the teammates also had to test the quality of their finished product. To do so, they used a pH test kit, ammonia tester and conductivity meter to determine the number of impurities and nutrients in their filtered water.

"They spent a lot of time researching, building and testing,"Deleon said. "I think this was a great learning experience for them to acknowledge that if they put their minds to something, anything is possible."

Part of their kudos for a job well-done included a trip to Kennedy Space Center, where they toured the Space Station Processing Facility, the Vehicle Assembly Building, Orbiter Processing Facility-2, Launch Pad 39A, where space shuttle Atlantis awaits its STS-135 launch, and the Space Life Sciences Lab. They also toured the Indian River Lagoon on a boat and met with NASA scientists and engineers to discuss their design and learn about other sustainability challenges the agency is working to conquer.

"I think our design can help outside of the space industry, too," said Amy after meeting with Kennedy employees, "Maybe in disaster-stricken areas, like Japan where a tsunami just hit."

Even though Aqua De Vida's system seems complex and is quite bulky, taking up about 8 feet of real estate on the ground, the team says its design can be scaled down for easier transport.

The possibilities don't end there. The system eventually could help boost the immune systems of astronauts on long-duration missions. That's something that could benefit Maeve years from now if she decides to transition from her chosen career path of a member of the Marine Corps to the Astronaut Corps.

"Some of the algae that we used really helps with preventing radiation sickness, or treating it," said Katelyn, who now is considering a career in engineering.