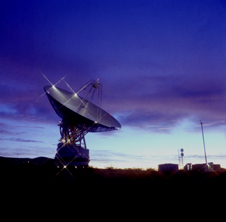 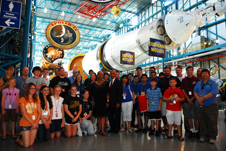 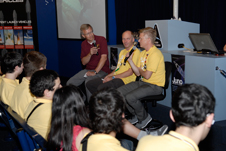 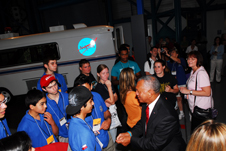 Famous astronomer Galileo Galilei was well into his 40s when he discovered moons orbiting our solar system's largest planet -- Jupiter. By those standards, there are thousands of students who are light years ahead in their research of the cosmos.

About 8,500 kindergarten through 12th-grade students from the United States and Chile are involved in the Goldstone Apple Valley Radio Telescope (GAVRT) project, which allows them to operate a 112-foot retired NASA radio telescope to study black holes, quasars and planets. They also have the unique opportunity to monitor the health of NASA's spacecraft, including its newest planetary probe to Jupiter -- Juno.

"We try so hard to get students interested in pursuing science, technology, engineering and mathematics (STEM) careers and it's often difficult to get them engaged in a classroom environment," said Shannon McConnell, the Education Public Outreach lead for NASA's Deep Space Network. "To give them something hands-on like the GAVRT project, running a real radio telescope and collecting real data, gives them such an authentic experience."

"We're trying to instill in students a desire to study math and science, learn about engineering because most kids have no clue what engineers do. Most people, when you say 'engineer,' they think about the guy in the front car of a train, and we want to get them exposed to what's available in the field of engineering and technology," said NASA Administrator Charlie Bolden.

McConnell explained that the GAVRT project began as a partnership between NASA’s Jet Propulsion Laboratory and the Lewis Center for Educational Research shortly after the large telescope in Apple Valley, Calif., was retired in 1996. Since then, GAVRT students have been involved in engineering projects for the space agency's Lunar Crater Observation and Sensing Satellite (LCROSS) mission to the moon, choosing a landing site for the Opportunity rover to Mars, and infrared astronomy work with the Spitzer Space Telescope.

About 30 GAVRT students, their teachers and mentors traveled to NASA's Kennedy Space Center in Florida to meet with the scientists behind their newest space tool as well as Launch Services Program engineers who were preparing to launch Juno atop a United Launch Alliance Atlas V rocket on Aug. 5.

Claire and Lydia from Wheeler High in Marietta, Ga., and Sabine from Campbell High in Smyrna, Ga., were among those students. They said they developed their fascination of studying the universe after designing their own radio receiver telescope through NASA's JOVE project when they were attending East Cobb Middle School.

"That's really when we became interested in Jupiter and our teacher got us access to the telescope in California," Sabine said.

"We had the Radio JOVE antenna up and running, we had GAVRT connected, and we had my 8-inch reflector telescope in the parking lot looking at Jupiter," said Stillwell. "So they could look at the planet visually, they could collect data at 2.4 GHz, and they could see the interaction between Jupiter and its moon, Io, at 20.1 MHz. Very different observations of the same target going on and the conversations between students were interesting as they discussed the results."

"It's been really cool to develop our own interests through GAVRT," said Lydia, who will likely hone in on a literary career after high school. "I'm really looking forward to discovering what's under Jupiter's cloud tops through the Juno mission."

The GAVRT group also was given the opportunity to stick around and see Juno launch from the Banana Creek Viewing Site near Kennedy's Apollo/Saturn V Center. Stillwell, who now is a robotics program director for the Center for Education Integrating Science, Mathematics and Computing (CEISMC) at the Georgia Institute of Technology, said this will be his first launch since watching the final moon mission take off in 1972.

"My friends and I drove to Florida from Raleigh, N.C., stopped on the side of I-95 to watch Apollo 17 launch, got back in the car and drove home," Stillwell said. "Since the Russian Sputnik, I've watched most every other launch on TV and so to see the Atlas launch will be full circle for me."

Beginning in 2016, GAVRT students will begin collecting data alongside Juno's Principal Investigator Dr. Scott Bolton and his team at the Southwest Research Institute in San Antonio, Texas. Their goal will be to provide ground-based radio observations for precisely mapping the gas giant's magnetic field, determining the planet's mass, measuring its water and oxygen to understand how and where the planet formed, and solving the many puzzles of its weather and atmospheric system.

"I'm really looking forward to learning more about the formation of our solar system with the data Juno transmits back to Earth," said Nicolas, a 10th-grader from Colegio La Concepción in Chile. "There's a lot to discover."

Those potential discoveries are what the NASA administrator hopes entices students to continue NASA's goal of discovering what lies beyond our home planet.

Bolden said, “I think that's what's really critical about the work that GAVRT students do. They're actually working with scientists and it's an experience that they'll probably never forget."