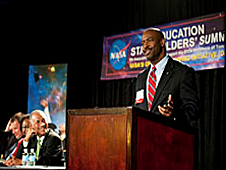 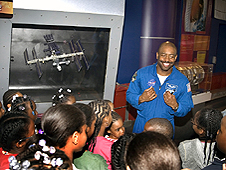 Astronaut Leland Melvin explains the components of the International Space Station to students at the Science Museum of Virginia.
Image Credit: NASA/Sean Smith 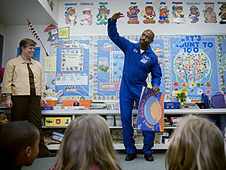 Leland Melvin reads "Zoom, Zoom, Zoom, All the Way to the Moon" to Mrs. Elder's kindergarten class in 2008.
Image Credit: NASA/Sean Smith
NASA Administrator Charles Bolden announced Tuesday the selection of Leland D. Melvin as the agency's new associate administrator for education, effective immediately. He succeeds James L. Stofan, who had served in an acting capacity since the spring.

Since April 2010, Melvin has been assigned to the Office of Education at Headquarters leading the Education Design Team. His job was to develop a strategy to improve NASA's education offerings and to assist the agency in establishing goals, structures, processes and evaluation techniques to implement a sustainable and innovative science, technology, engineering and math (STEM) education program. He also served as the partnership development manager for the agency's new Summer of Innovation education initiative, aimed at engaging middle school students in STEM activities during the summer break.

"I am delighted to have Leland lead the Office of Education at a time when engaging more students in STEM-related studies and careers is so critical -- not only to NASA but to our nation," Bolden said. "With his dedication and passion, I know we will have a bright future in education under his leadership."

"I also want to thank Jim Stofan for the outstanding job he has done leading the Office of Education since April," Bolden added. "He launched several key new education programs during his tenure and will continue to be a valued asset as he resumes his previous role as deputy associate administrator."

As associate administrator, Melvin will be responsible for the development and implementation of the agency's education programs that strengthen student involvement and public awareness about NASA's scientific goals and missions.

"My passion for education was inspired by my parents, who were both middle school teachers," Melvin said. "I witnessed the direct impact that educators can have in a community and on an individual's destiny. NASA's people, programs and resources are unparalleled. Our unique assets are poised to engage students, to captivate their imagination and to encourage their pursuit of STEM-related studies that are so vital to their future. This is an exciting challenge and I am ready to work with Administrator Bolden, my colleagues at NASA, our partners, and students across the country to usher in a new era of opportunity to inspire that next generation of explorers."

Melvin joined NASA in 1989 as an aerospace research engineer at the agency's Langley Research Center in Hampton, Va. He joined the astronaut corps in 1998 and has served as a mission specialist on two space shuttle missions: STS-122 in 2008 and STS-129 in 2009. He has logged more than 565 hours in space. In 2003, Melvin co-managed the former Educator Astronaut Program, which recruited teachers to become fully-trained astronauts in an effort to connect space exploration with students across the country.

Melvin earned a bachelor of science in chemistry from the University of Richmond, where he also excelled as a wide receiver for the Spiders’ football team. He was drafted into the National Football League by the Detroit Lions in 1986 and also spent time with the Dallas Cowboys and the Toronto Argonauts. After injuries sidelined his football career, he returned to academia and earned his master’s degree in materials science engineering from the University of Virginia in Charlottesville.