Grow Text SizeShrink Text Size
Rocketplane-Kistler (RpK)
In November 2006, RpK was selected as one of the funded commercial partners for the COTS program. RpK met their first three milestones and then encountered some financial funding issues. Due to failure to met their next milestone according to the SAA, NASA terminated RpK’s SAA in October 2007.

RpK K-1 Vehicle. Image Credit: RpK
RpK is developing orbital and suborbital space transportation vehicles, including the Kistler K-1, a reusable launch vehicle capable of taking payloads to orbit and of taking cargo to and from space. Among other things, RpK expects that the K-1 will be capable of taking cargo to and from the International Space Station. RpK also expects to develop the capability for the K-1 to carry humans to and from space. To date, RpK and its predecessors have spent substantial amounts on the K-1 program, has generated significant data, and has either been granted or has pending applications for a number of patents related to the K-1 program. 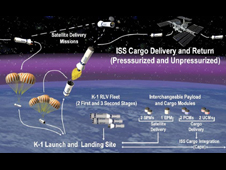 RpK Concept of Operation. Image Credit: RpK
The K-1 System is an integrated space delivery system that consists of five fully reusable two-stage launch vehicles, and two sites that support the launch vehicle checkout, payload integration, integrated vehicle launch, vehicle stage recovery, and vehicle maintenance and refurbishment. The K-1 system architecture identifies the major elements of the K-1 space delivery system which is illustrated in the image to the right. 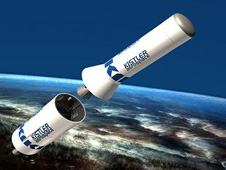 K-1 Vehicle Separation. Image Credit: RpK
The K-1 reusable launch vehicle is composed of two stage vehicles stacked together. The first stage is the Launch Assisted Platform (LAP) and the second stage is the Orbital Vehicle (OV). These two vehicles together form the K-1 launch vehicle. A family of interchangeable Payload and Cargo Modules are attached to the front of the OV prior to launch. The interchangeable Payload and Cargo Modules satisfy a large variety of commercial missions for both ISS re-supply and satellite delivery. To the right is an image of the K-1 vehicle with the LAP and OV stages separating. 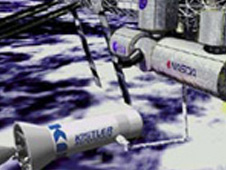 RpK berthed to ISS. Image Credit: RpK
The LAP launches the vehicle to the desired mission altitude and velocity before releasing the OV to continue into orbit. The LAP, after OV release, returns to the launch site and lands using parachutes and air bags for a soft touch down. The OV ascends to orbit and either releases the payload or rendezvous with the ISS for cargo delivery. After payload release or cargo delivery, the OV synchronizes its orbit to the plane of the landing area. At the appropriate time, the OV reenters the earth’s atmosphere and makes a soft landing at a prescribed landing area. Parachutes and air bags provide the OV with stabilization, final deceleration and a soft landing. 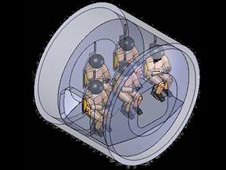 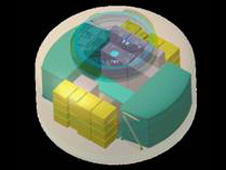 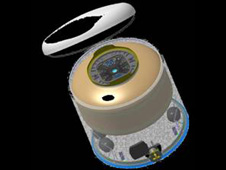 
Click on this link to view a video of the RpK K-1 vehicle.

Please click on the link to learn more about RpK.