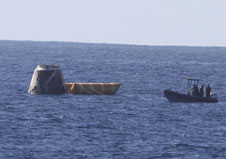 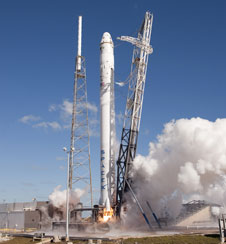 The SpaceX Falcon 9 carrying a Dragon capsule lifts off the launch pad at Launch Complex 40 at Cape Canaveral Wednesday, Dec. 8, 2010, to begin what would be a successful test flight for its program designed to deliver cargo to the International Space Station. Photo credit: NASA/Alan Ault
› Larger image 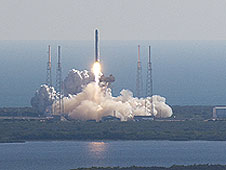 SpaceX Corp. tested its Falcon 9 and a fully functioning Dragon capsule combination during a brief mission launched from Cape Canaveral Air Force Station on Dec. 8, 2010. The uncrewed capsule parachuted back to Earth about three hours after liftoff following maneuvers in orbit, a first for the privately owned company.

Flames erupted from the base of the Falcon 9 at 10:43 a.m. as it sat at Launch Complex-40. A few seconds later, the rocket and its Dragon capsule pushed above the surrounding lightning towers and headed into orbit.

After working through its maneuvers, the Dragon fired its braking rockets to begin re-entry. Like the Apollo spacecraft of the 1960s and 70s, the Dragon pierced Earth's atmosphere protected by an ablative heat shield. Parachutes deployed and the spacecraft splashed down in the Pacific Ocean off the coast of California.

"This has really been better than I expected," said Elon Musk, the founder and CEO of SpaceX. "It's actually almost too good."

The test flight was the first under a NASA contract called COTS, short for Commercial Orbital Transportation Services. The contract was set up to encourage private companies to ship cargo to the International Space Station.

"This is really an amazing accomplishment for SpaceX," said Alan Lindenmoyer, NASA's Commercial Crew and Cargo program manager. "From all indications, it looks like it was 100 percent successful."

It was the second test flight for the Falcon 9, a 180-foot-tall, medium-lift booster SpaceX developed in part to service the station. The first Falcon 9 successfully launched a Dragon capsule simulator into orbit on June 4.

"We're beyond the 'Is it possible?' We did it and now we move on," said Gwynne Shotwell, president of SpaceX.

The successful mission could clear the way for a Dragon spacecraft to rendezvous with the station sometime next year, potentially delivering cargo on that flight.

Before the launch, NASA voiced a high level of support for the mission.

"Getting this far this fast has been a remarkable achievement," said Phil McAlister, NASA's acting director of Commercial Space Flight Development. "No matter how this spaceflight goes, we are committed to this program."

NASA wants rockets like the Falcon 9 and Orbital Sciences' Taurus II to carry important supplies, experiments and equipment to the space station after the space shuttle fleet is retired in 2011.

The rockets and capsules could one day carry astronauts to the station as well. But for this flight, the pressure was on SpaceX to demonstrate its nine-engine booster and accompanying capsule would work as advertised.

The next Falcon 9/Dragon launch is slated for 2011.