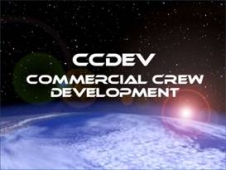 
NASA awarded approximately $270 million to four commercial companies April 18 to continue development of commercial rockets and spacecraft capable of safely flying astronauts into orbit and to the International Space Station. The award was the second phase of the agency's Commercial Crew Development effort, known as CCDev2.

"We're committed to safely transporting U.S. astronauts on American-made spacecraft and ending the outsourcing of this work to foreign governments," NASA Administrator Charlie Bolden said. "These agreements are significant milestones in NASA's plans to take advantage of American ingenuity to get to low Earth orbit, so we can concentrate our resources on deep space exploration."

The goal of the program is to have a human-capable certified spacecraft flying by the middle of the decade, said Phil McAlister, acting director of Commercial Spaceflight Development. The agency also intends that development costs will be cheaper because the launchers and spacecraft can split the price between commercial and government uses.

For the second round of agreements, proposals selected were:
- Blue Origin: $22 million. The company is working on a space vehicle design development for their biconic "New Shepard" spacecraft, designed to take off and land vertically.
- Sierra Nevada Corp.: $80 million. Sierra Nevada is designing a lifting body called "Dream Chaser."
- Space Exploration Technologies (SpaceX): $75 million. SpaceX plans to use the award to develop an escape system for a crewed version of its Dragon capsule, an uncrewed version of which has already flown.
- The Boeing Company: $92.3 million. The Boeing Company will continue development of the CST-100 crew capsule, including maturation of the design and integration of the capsule with a launch vehicle.

The selection was based on how far the awards would move the companies toward their goals and the business plans of each project, McAlister said.

"We should have an exciting 12 months," said Ed Mango, program manager of the Commercial Crew Program at NASA's Kennedy Space Center in Florida. "I believe this effort will help close the gap in U.S. human spaceflight."

The space shuttle fleet will be retired this summer after two more missions and NASA is counting on a new commercially developed spacecraft to take over the work of carrying astronauts into low Earth orbit. The agency also is hoping to save on development and operational costs by partnering with the commercial industry.

As the companies continue their development plans under the agreement guidelines, McAlister said the next step for NASA is to refine the strategy for the next round of development.