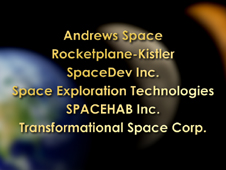 COTS Phase I, Round I Six Semi-finalist. Image Credit: NASA
NASA received 21 proposals from 20 companies across the full spectrum of the industry.

Unfunded Space Act Agreements have been established or are in work for several other competitors. Some of these may still compete for the Phase 2 ISS Services contracts.

Round 1 Announcement
› Back To Top