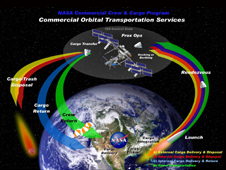 Phase 1 is called the Commercial Orbital Transportation Services (COTS) Demonstrations. Under COTS, NASA helps industry develop and demonstrate its own cargo space transportation capabilities. Industry leads and directs its own efforts with NASA providing technical and financial assistance. NASA is investing approximately $800M from 2006 thru 2012 toward cargo space transportation flight demonstrations which are planned for completion in 2012. NASA payments are made only upon completion of progress milestones by its industry partners.

The first COTS competition lasted 10 months and was completed in August 2006. Two COTS Commercial Partners (CPs) were selected to participate in Phase 1: Space Exploration Technologies (SpaceX) and Rocketplane-Kistler (RpK). The agreement with RpK was later terminated after it failed to complete financial and technical milestones. A second competition was held to select a new funded commercial partner which resulted in selection of Orbital Sciences Corporation (Orbital) in February 2008. The COTS projects are managed by the Commercial Crew & Cargo Program Office (C3PO).

Phase 2 is a competitive procurement for cargo services to support the ISS. NASA awarded two contracts for transportation services in December 2008 to SpaceX and Orbital. The Cargo Resupply Services (CRS) contracts are managed by the ISS Transportation Office. The CRS contracts procured a total of 20 cargo transportation missions to the ISS through 2015.

C3PO uses NASA’s Space Act authority to establish industry agreements and provide the legal flexibility necessary for the program. These agreements are known as Space Act Agreements (SAAs). The winners of the COTS competitions received funded SAAs. Other industry teams are developing commercial space transportation systems and some have unfunded SAAs for technical assistance from NASA. In cases where industry compensates NASA for performing work on its behalf, a reimbursable SAA is used. In all of these cases, companies with SAAs are not contractors; they are known as Commercial Partners (CPs).

To encourage innovation, C3PO broadly targeted service goals for the projected cargo space transportation markets rather than specify spacecraft design solutions. Firm requirements and processes were specified by NASA where necessary for safety and ISS certification. Private investments are encouraged by CPs, which retain the maximum rights to intellectual property allowed by law. The CPs' operations will be licensed by the FAA and will use cross-waiver liability provisions. The government’s rights to unilaterally terminate its support were restricted to the maximum extent possible to help encourage private investment. Congressional legislation is required to terminate the COTS projects.

A key feature of the COTS SAAs is that NASA will make fixed-price payments only when performance based milestones are completed according to objective success criteria. NASA’s investments will not result in the government assuming any equity in the participating companies. NASA benefits from lower costs to service the ISS.

The COTS commercial partners are responsible for the overall design, development, manufacturing, testing, and operation of their COTS system. In order to receive NASA financial assistance, the COTS partners must conduct the COTS demonstrations according to the terms and conditions in their SAAs and consistent with the COTS ISS Service Requirements Document (ISRD) and the ISS-to-COTS Interface Requirements Document (IRD).

NASA has intentionally limited its participation in the commercial partners' programs to enable maximum use of innovative, cost-effective commercial practices. NASA’s primary role is to monitor the progress of its CPs through an assessment of the SAA milestones and to make payment for successfully completed milestones. NASA provides expert technical assistance as requested or where considered necessary via the NASA COTS Advisory Team (CAT), discipline experts drawn from across the Agency. CATs selectively support CP reviews and consult on technical issues as requested. More extensive NASA support requires reimbursement for services or facility use via Reimbursable Space Act Agreements. Commercial Partners also receive ISS integration and certification support for their visiting vehicles.

NASA resource limitations require restrictions on the level of support that can be provided to Commercial Partners with unfunded SAAs. Unfunded CPs are not permitted to conduct demonstration flights to the ISS. However, they can provide alternative orbital test beds which simulate the ISS and its interfaces. Unfunded CPs have access to ISS interface data and NASA technical support as resources permit.