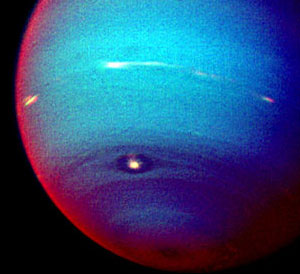 Image right: This false color photograph of Neptune was made from Voyager 2 images taken in January 1996. Image credit: NASA.

Scores of stunning NASA images of space are featured in the program of music to be performed on July 7 at 8:30 p.m. EDT at Wolf Trap National Park for the Performing Arts in Virginia. The event also features a special appearance by NASA astronaut Carl Walz, who spent 196 days aboard the International Space Station as part of Expedition 4 in 2002.

Emil de Cou conducts as the orchestra performs Holst's "The Planets," plus music from Star Wars, Star Trek and other science fiction films.

The images, to be projected on stage behind the orchestra, were obtained by numerous NASA projects and missions, including the Mars Exploration Rovers and the Hubble Space Telescope.

For more information about the event, visit: