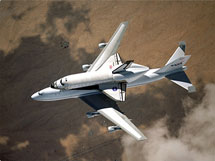 Left: The Space Shuttle Columbia hitched a ride on a NASA 747 aircraft.

Unbeknownst to most people, NASA's two massive 747 Shuttle Carrier Aircraft (SCA), in addition to their well-known roles as piggyback-ride providers for the Shuttles, carry a much less glamorous cargo of gravel and iron.

"You see, the nearly 2 tons (1710 pounds) of pig iron up-front in the former first class section of the aircraft, and the 3.5 tons (7000 pounds) of pea gravel in the cargo hold are for keeping the aircraft’s center of gravity forward when a heavy Shuttle is mounted on top," says Seidl.

All aircraft need to be balanced, and keeping their center of gravity in the right place is key. Without the gravel and iron, the tail-heavy Shuttles, made so by their rocket engines, could cause the 747s to experience flight instability. So, the gravel and iron provide much-needed weight toward the noses of the 747s to balance out the problem. 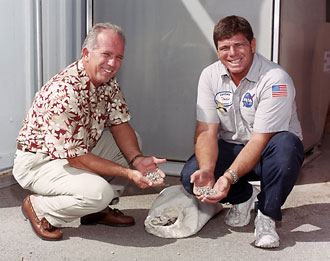 The pea gravel, so-called due to the size of the pebbles, is contained in cargo containers in the lower forward cargo bay. The pig iron, which is the raw material of steel, is secured to the floor in the first class section forward of the first row of seats. Not the most high-tech ballast around, but affordable and effective.
With small hatches and ladders in various locations leading down three decks, NASA's 747s might remind one of being aboard a big ship.

What other little-known secrets lurk aboard these giant aircraft? Other lesser-known facts about the SCAs include:

Following the wake vortex studies, NASA 905 was modified by Boeing to its present SCA configuration and the aircraft was returned to Dryden for its role in the 1977 Space Shuttle ALT project. This series of eight captive and five free flights with the orbiter prototype Enterprise, in addition to ground taxi tests, validated the aircraft's performance as an SCA. In addition, the glide and landing characteristics of the orbiter configuration were verified, paving the way for orbital flights.

The two SCAs are under the operational control of NASA's Johnson Space Center in Houston, Texas.

For more on NASA's 747 Shuttle Carrier Aircraft, visit the Web at: