In the early morning of August 25th at 1:35:39 a.m. EDT, NASA successfully launched the new Space Infrared Telescope Facility aboard a Boeing Delta II Heavy Launch Vehicle into the first-ever Earth-trailing orbit. Using the same technology that allows firefighters to see in the dark, the observatory will provide researchers the astronomical equivalent of heat-sensing night vision goggles.

Potential targets of the observatory's unique infrared sight will be planet-forming discs around stars, brown dwarfs and distant galaxies billions of light years away. The launch is scheduled for 1:37 a.m. EST from Cape Canaveral, Florida.

"The Space Infrared Telescope Facility will detect objects that have been too cold, too hidden in dust or too far away to be seen by other space observatories," says Dr. Michael Werner, the mission's project scientist at NASA's Jet Propulsion Laboratory. Researchers hope for exciting and unexpected discoveries with the additional observing power of the telescope. "You can think of this mission as lifting a cosmic veil," says Werner. 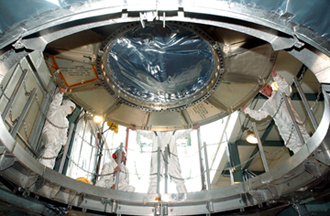 Right: The Space Infrared Telescope Facility is lowered into the opening of the mobile service tower on Launch Pad 17-B, Cape Canaveral Air Force Station.

Like night vision goggles, the observatory will detect infrared radiation, or heat, that our eyes cannot see. Because many space objects -- such as space dust, brown dwarfs and faraway galaxies -- give off light primarily in the infrared, the new telescope will be able to see many of these structures for the first time.

Ultimately, the Space Infrared Telescope Facility will help to answer the fundamental questions underlying NASA's Origins Program: "Where did we come from? Are we alone?" By cataloging and analyzing the composition of dusty discs around stars, the observatory will aid the search for Earth-like planets that may harbor life. What's more, by studying galaxies billions of light years away, it will open a window to our cosmic origins.

NASA's newest observatory also features a handful of technological breakthroughs, which both improve instrument sensitivity and dramatically reduce costs. To sense infrared radiation in deep space, all other sources emitting this type of light, such as Earth, the Sun and the telescope itself, must be blocked. The Space Infrared Telescope Facility accomplishes this objective by several means, including the first-ever Earth-trailing orbit around the Sun, which will distance the telescope from Earth.

The telescope will be primarily cooled by a tank of liquid helium, while an innovative "warm launch architecture" will allow the chilliness of space to initially do the cooling, thereby slashing costs. Solar panels will provide power for the spacecraft, but will also do double duty by acting as a heat shield to shade the rest of the Space Infrared Telescope Facility.

The Space Infrared Telescope Facility is the last of NASA's suite of Great Observatories, a program that includes three previous missions that studied the universe with visible light, X-rays and gamma rays. Respectively, these missions are the Hubble Space Telescope, Chandra X-ray Observatory and Compton Gamma Ray Observatory. The Space Infrared Telescope Facility is expected to observe the cosmos for two and one half to five years. 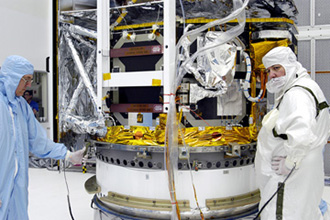 Left: Workers process the Space Infrared Telescope Facility, which will remain in the clean room until it returns to the pad in early August.

For a press kit detailing the mission, visit:

Written by: Whitney Clavin
Jet Propulsion Laboratory
› Back To Top