NASA Electronics Pioneer Dies at 85
John T. Mengel, one of NASA's pioneers, died October 22, 2003 at age 85. He moved from the U.S. Naval Research Laboratory to NASA in October of 1958, when NASA assumed responsibility for the Vanguard Scientific Earth Satellite Program. 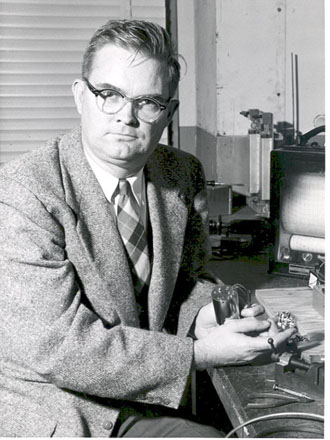 Image left with original file photo description: "Project Vanguard Scientist examines small transmitter that will be used to send signals from the unmanned Earth satellite. John T. Mengel, head of the Project Vanguard tracking and guidance branch at the Naval Research Laboratory, examines the assembled Minitrack Transmitter Pack and an exhibition model that was constructed on a clear plastic sheet so that the components are clearly visible after assembly. The model closely resembles the actual minitrack transmitter, the real transmitter, which Mr. Mengel is holding in his hand, is assembled in a gold-plated aluminium container." Photo credit: Naval Research Laboratory/NASA History Office.

Mengel, born in Ballston Lake, New York, in 1918, received his Bachelor of Science in Physics from Union College in 1939. The year following the attack on Pearl Harbor, Lieutenant Commander Hyman Rickover hired him to work at the U.S. Naval Laboratory on anti-submarine devices.

Continuing his work with the Naval Lab after World War II, Mengel experimented with telemetry and radio control systems in captured German V-2 rockets, and conducted upper atmosphere experiments by launching the rockets into near-earth orbit. He was responsible for the design and fabrication of the first research nose shell to replace of the V-2 warhead. Placing cameras in the nose shell, he and his team shot the first photo from space at an altitude greater than 100 miles. 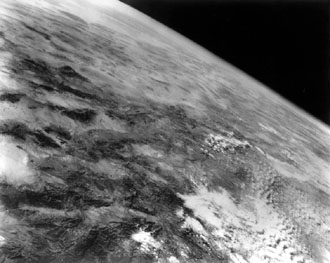 In 1950, Mengel worked on guidance systems for the Viking missile project and its possible applications to submarine warfare. By 1955, he headed up the Tracking and Guidance Branch of Project Vanguard. His team developed a one-inch wavelength X-band interferometry system, which they converted into the "Minimum-sized Tracking System" or "Minitrack." Using the Minitrack system, the United States tracked Russia's Sputnik, the world's first satellite, and supported the first launch of Project Vanguard in March, 1958. The Naval Research Lab later named the Minitrack one of the 75 most innovative systems developed at the Lab.

After the National Aeronautic and Space Administration was established in October, 1958, Mengel moved to NASA's Goddard Space Flight Center with most of the Vanguard team. He served as Director for tracking and data systems at Goddard until he retired in 1974. NASA awarded Mengel the Exceptional Service Medal in December, 1965:

"For his outstanding contributions to the mastery of space flight as demonstrated by the development and operation of world-wide networks for tracking, data acquisition, and communications in support of NASA space programs, manned and unmanned, scientific and applied, and for leadership in the development of the basic operational concepts that have resulted in efficient program support by these facilities as recently evidenced in the Gemini VI and VII rendezvous space flights."