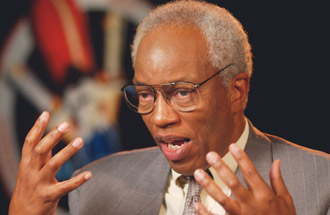 When he was accepted into NASA's astronaut training program in 1978, Guy Bluford never aimed to become the first African-American in space.

"My desire," says Bluford, "was to make a contribution to the program."

Twenty years later, Bluford can still remember the rain-soaked, early Florida morning of August 30th, 1983, when a crowd of VIPs and other soggy well-wishers at the Kennedy Space Center awaited Space Shuttle Challenger's soar into history on STS-8.

"People came from all over to watch this launch because I was flying," says Bluford today, recalling his thoughts while strapped in and awaiting Challenger's dramatic liftoff. "I imagined them, all standing out there at one o'clock in the morning with their umbrellas, all asking the same question, 'Why am I standing here?'"

Bluford, one of three African-Americans in that 1978 barrier-breaking class of astronauts (NASA Deputy Administrator, Fred Gregory and the late Challenger astronaut, Ron McNair, the others), believes he was selected for the history-making mission because of his complement of pilot and engineering experience.

Regardless, Bluford says he had plenty of fun as he and his four crew members successfully completed their mission. 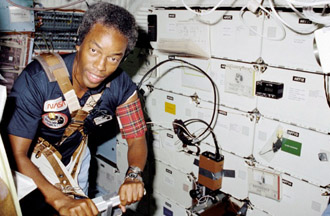 "The crew taped the intercom conversation," says Bluford of Challenger's liftoff, an experience they replayed upon their safe return to Earth. "There's somebody giggling and laughing all the way up. And we listened to it for quite a while to try and figure out who that was, only to come to the conclusion that it was me. I mean, I laughed and giggled all the way up. It was such a fun ride."

Bluford says it took him awhile to recognize the historical significance of his selection to be the first African-American in space. But when his pioneering role became apparent, Bluford says he embraced it.

"I wanted to set the standard, do the best job possible so that other people would be comfortable with African-Americans flying in space and African-Americans would be proud of being participants in the space program and… encourage others to do the same."