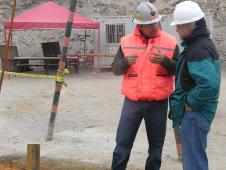 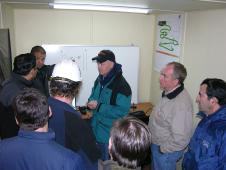 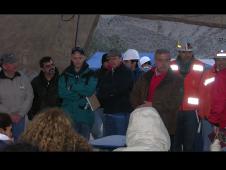 Clint Cragg, principal engineer with the NASA Engineering and Safety Center based here at Langley, never thought he would end up a media star. The former Navy submarine commander is not an astronaut or a top NASA administrator.

He is a problem solver who was called in along with three NASA health care professionals to consult with the Chilean government when 33 miners got trapped 2,300 feet underground. That visit to Chile has gotten him more face and phone time with the media than he ever would have guessed. It's also made him extremely interested in the rescue effort to free the miners.

"When I saw the first miner being extracted I was both happy and very relieved," said Cragg. "It appears the final design of the capsule is working, so I'm very happy about that."

That final design came after a lot of planning and hard work. The capsule is a narrow steel cage about 13 feet long that Cragg and a team of about 20 others from around NASA focused in on.

"I went down to Chile with two doctors and a psychologist from Johnson Space Center in late August about three weeks after the cave-in," said Cragg. "Initially what the Chileans were asking for was medical and psychological assistance because of NASA's experience in harsh environments." But the engineer went along to see how else NASA might be able to help.

The Chileans took the NASA engineer up on his offer by email after he turned to the United States.

"I put together a team of engineers from almost every center around the agency," said Cragg. "Over the course of three days we hammered out a 12 to 13 page list of requirements for the capsule and sent that to the Chilean Minister of Health."

"After we had sent the requirements, I got some communication from one of the Chilean Navy commanders intimately involved in the design process of the capsule," said Cragg. "He told me that they had incorporated most of the suggestions we had provided to them."

Cragg has worked at NASA for seven years since he retired from the Navy. He says his colleagues' efforts are one of things he'll take away from this event after all the media excitement is over.

"There are a couple of things I'll remember most about this whole experience. One is the openness and graciousness of the Chilean people," said Cragg. "I thought they were very supportive of our visit and very supportive of the things we recommended they ought to do,"

"The other thing I'm taking away from this is our agency really has a lot of exceptional people," he added. "The 20 or so engineers who offered to drop everything and work with me for three days to put this requirements list together really exemplify the things that NASA stands for."